I meet many turf managers on a daily basis and, without doubt, the old chestnut of achieving consistent golf greens that deliver pace and trueness is upon us again.

The subject has been more than well covered in recent years through seminars, internet forums and numerous articles.

During my career as a golf course manager, I prepared putting surfaces on links courses for golf club members and championships run at county level and internationally by the R&A, I also managed resort style courses, preparing modern USGA greens for European Tour events whilst, at the same time, attempting to satisfy the demands of a commercial, corporate golf business.

I would like to share, through this article, my experiences of achieving consistent, true greens with pace. This was achieved through mostly cultural methods, which started out as basic tournament prep, eventually incorporated into my every day maintenance programme.

We are all well aware of the 2mm debate which is advocated by some, supported with claims of success, albeit over a relatively short period of time. Personally, I remain sceptical that, long term, this method is sustainable, even with increased verticutting, topdressing, aeration, and taking into account the current financial climate. Increased budgets will be necessary to cope with additional nutrient and chemical inputs required to support a grass plant that, agronomically, is having its basic metabolic function to photosynthesise considerably reduced. 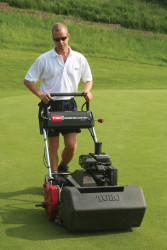 It is universally accepted that golf course management has to be sustainable which, of course, is nothing new. Sustainable methods were very much evident - perhaps because of the lack of technology, mechanisation etc. - back in the days of Old Tom Morris, and heavily advocated by the late Jim Arthur.

My approach to delivering golf greens that were consistent in pace and trueness across all nineteen, be it on a sandy old style links or on a modern resort style course, was fundamentally the same for both. For most of the time, this approach was successful without compromising height of cut and, as a consequence, the general health of the plant on a consistent basis.

Clearly, the basics have to be right, and are just as important in achieving the desired outcome as the methods I will go on to describe, and which form part of daily course preparation.

Nutrient inputs should be accurate to the plant's needs, based on regular soil analysis and the turf manager's observations and understanding of his surfaces gained through his own experience of them. It goes without saying that excessive growth should be avoided at all costs, as surfaces that are growing significantly through the course of a day are not going to deliver consistency in pace or trueness, and will go on to increase thatch levels inevitably producing slower surfaces.

Sub surface and surface aeration on a regular basis, throught the year, are vitally important in order to create and maintain the surface characteristics required to deliver the desired outcome. In my experience, the summer aeration programmes we can now carry out through improved equipment and machinery - resulting in minimal surface disturbance and a fast operation in front of play - have contributed to an overall improvement in surface conditions and, significantly, root growth. Improved water and air penetration into the rootzone on a regular basis during the growth period is very beneficial to short and long term health and sustainability of the grass plant.

Frequency and direction of cut, in my experience, delivers consistency, pace and trueness throughout the golfing day; rather than one low height of cut carried out in often damp early morning conditions, probably not achieving the desired bench setting in any case, and certainly not achieving it by late afternoon or early evening, when some growth will have occurred during the day.

It became very evident to me that I could deliver better surfaces, particularly for the popular summer late afternoon and early evening golf period, by changing and adapting mowing regimes I had followed for most of my career. I concluded that there was little value in carving a green down to extreme low heights of cut in the early morning when, obviously, that was going to change through the course of the day, resulting in inconsistency of playing conditions.

In practice, with a busy golf course, a second daily cut around midday can obviously be problematic, but I found that, with careful planning, one machine on each nine holes, and a desire to make it happen, the operation could be carried out fairly quickly. On occasions, when a cut later in the day wasn't possible, the greens were double cut in the morning. 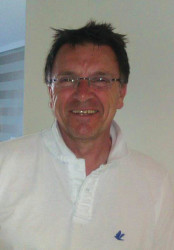 The direction of the second cut was always directly against the grain of the morning cut, effectively taking out the stripe, and resulting in no nap whatsoever and a much more upright grass plant.

This, in turn, delivered less drag on the golf ball and, therefore, a faster surface that was true and consistent. The roll up effect across a week and a month was quite significant. In this way, pace and trueness were achieved without compromising height of cut.

I found this method even succeeded when I was managing a resort style course, heading towards a major European Tour event, with differing rootzones and grass species across all nineteen greens, and including one green that was only a few months old at the time of the event.

Soil push ups, USGA spec and 70/30 mix rootzones all produced the same speed and trueness, judged by some of the world's top professional golfers as more than acceptable.

In general terms, and as a point of interest, not only did this deliver fast, true surfaces on a consistent basis, but we found that the need for verticutting, grooming and brushing operations were dramatically reduced. The extra man hours required for the extra daily cut was more than offset by the reduction in time spent perfoming these operations.

Aesthetically, greens without stripes may not be to everyone's taste, but I feel they look sharper and slicker and, with stripes forming a part of the rest of the golf course presentation, the overall effect can be quite pleasing.

In conclusion, this is a sustainable way forward of producing the speed and trueness that has become so desirable at club and championship level, without compromising height of cut to ultra low levels and, in turn, the present and future health of the grass plant.