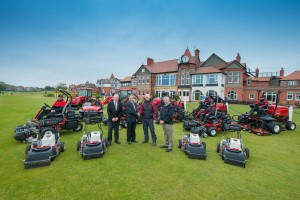 Historic links course Royal Liverpool has reaffirmed its relationship with Toro and distributor Lely by making its biggest fleet investment yet, spending £300,000 on new machinery - including the very latest green technology.

The 18-hole Hoylake course has been an exclusive Toro customer for the past 10 years, but used a mix of machinery, including 50 percent Toro kit, for the five years prior to that. Course manager Craig Gilholm says the fact that the fleet never let him down in the eight years he's been with the club convinced him, with the backing of his greens chairman, to sign on the dotted line for a further five years.

The new arrivals reflect the club's commitment to more sustainable course management, with Craig choosing Toro's revolutionary hybrid and electric models over diesel and petrol versions in a bid to cut fuel costs and become greener.

As Craig explains: "It's really important to us to be greener, but we want to keep moving forward by investing in the latest machinery and technology, too. Fortunately models like Toro's new TriFlex and eFlex greensmowers allow us to do both because they're the newest, greenest and best machines available on the market today."

Royal Liverpool was one of the first clubs in the country to demo Toro's revolutionary TriFlex Hybrid 3420 riding greensmower when it was first launched in 2011. And Craig was so impressed he now counts four among his new arrivals. "The TriFlex mowers are very impressive. I prefer the new riding position, the onboard diagnostics are very useful for our mechanics and I like the whole concept of removing the hydraulics from the cutting units, which virtually eliminates hydraulic leaks. We've got two for our greens, plus another two for cutting our tees and surrounds."

Another key purchase was the club's eFlex all-electric pedestrian greensmowers, which boast an industry first in the form of their lithium-ion battery power source. "We've got six eFlex mowers with grooming brush attachments," Craig continues. "These are a new concept to us, being all-electric. We had three machines out cutting the other day and can do seven greens on a single charge per machine. According to Toro, we should be able to do nine without the attachment, so that's impressive for a battery-powered machine."

In a further bid to reduce fuel costs, the club has also replaced its Toro petrol-powered utility vehicles with four Workman MDE electric models. "We will be measuring our fuel savings on all the electric and hybrid machines over the next couple of years," says Craig. "Obviously you have to budget for buying new batteries, which aren't cheap, but we wanted to make the move to electric where possible."

Craig's green machines were joined in the order by three TranPro Trailers, two Greensmaster 3420-Ds, a Reelmaster 5410-D, one set of Verticutter Units, a Groundsmaster 3500-D, two Groundsmaster 4300-Ds and two TYM 433 tractors; and join an existing fleet of Toro golf favourites already at the club, such as the ProCore 648 aerator, a topdresser and a sprayer.

"We looked at competitor deals before renewing with Toro, but our fleet has been very reliable. So we decided to reinvest in Toro and with our distributor Cheshire Turf Machinery, and are looking forward to updating in the future. Our greens chairman is keen to make the biggest investment in the course yet to ensure the greenkeeping team has the best kit to work with - and that's Toro."