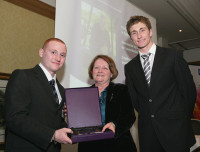 The awards were attended by some 150 guests, including employers, farmers, crofters, land managers, training providers and members of Scottish Parliament. Calum MacLeod, a 21 year old agricultural engineer from Fife, scooped the top prize.

Daniel had a double win on the night taking home a total cash prize of £450.00. In addition to the 'Horticulture Learner of the Year prize, the Oatridge College student took home the 'Scottish Enterprise Regional Winner' prize, sponsored by Scottish Enterprise.

Daniel, who is based at his home course of Hollandbush near Hamilton, is described by his training provider as a 'transformed, model student'. He is no stranger to awards having been a finalist at the Association of Public Sector Excellence awards and a runner up in the South Lanarkshire Apprentice of the Year Awards.

After demonstrating significant progress at Hollandbush, Daniel has now been put in charge of training of two younger apprentices. Daniel has also volunteered as a greenkeeper at Loch Lomond for the past two years, helping to prepare the course for the Scottish Open. Daniel says: "I just love working outdoors, the whole environment. It's the idea that you're working in a beautiful place each day. After some of my other jobs it's been a real Godsend and given me a new lease of life"

Entries doubled for this year's awards, organised by Lantra, the Sector Skills Council for environmental and land-based industries. Some 11 finalists from ages 15-44 from across Scotland were recognised at the awards which are judged by an independent employer panel of employers.

Maureen Watt MSP said: "The Scottish Government is committed to developing lifelong skills and making Scotland's skills base truly world class. We support the work of Lantra, who are playing an important role in providing training and improving skills for the land-based sector."

"I am very encouraged by the high calibre of nominees received for these awards, and congratulate all of the winners."

William Fergusson, Lantra's National Director for Scotland, said: "It is vital for the future of these industries that we continue to attract the high calibre of candidates demonstrated this evening. To do this, we must raise awareness of the many challenging and diverse career and training opportunities across Scotland. There are highly skilled jobs with real career progression on offer to new entrants of all ages."

Learndirect scotland were the principal sponsor of the awards this year with major sponsorship also provided by The Cadogan Trust, Highlands and Islands Enterprise, Scottish Enterprise and Forestry Commission Scotland. The annual awards are also sponsored by employers, farmers and land managers, demonstrating the commitment of industry to training and the awards.

Marjory Sweeney of Scottish Enterprise's Skills and Learning department said: "Scottish Enterprise is delighted to support the Lantra Learner of the Year Awards. The awards celebrate the achievement of a land-based Modern Apprentices and students, and recognises the benefits of investing in personal and workforce development."

This year's awards have seen an increase of over 400% in sponsorship funds. This has supported the introduction of several new prizes, including industry specific prizes and a 'Higher Education Learner of the Year' prize, reflecting the numbers of new entrants opting for the higher education route into the sector.

For further information on the awards please contact Lantra on 01738 553311 or visit www.lantra.co.uk/scotland.