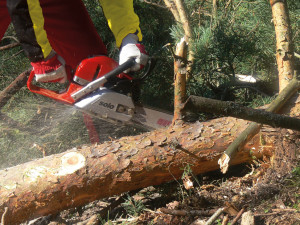 A greenkeeper is suing his golf club for a five-figure sum of money after slicing his foot with a chainsaw.

According to Dundee's Evening Telegraph, James Gowans, 47, has lodged court action against Downfield Golf Club after claiming that a chainsaw he was using sliced into his foot just over three years ago.

Mr Gowans - who has worked for the club for more than 15 years - claims to have suffered serious injuries while cutting trees at the course in December 2011.

It is understood that Mr Gowans was working in a wooded area between the practice ground and the second green at the time of the incident.

He was working with a chainsaw to clear trees which had been damaged in a storm.

'The chainsaw he was working with hit a hard patch of wood and kicked back, striking him on the left foot,' states the newspaper.

'The incident saw the machinery cut deeply into his foot, and he now suffers ongoing pain and likely nerve and ligament damage - which, it's claimed, has restricted his ability to work or play golf.'

Mr Gowans claims he sustained the injury to his left foot, with the cut on his big toe going close to the bone.

He was off work for more than three months and he is now taking action against the club to claim for damages related to a loss of earnings during that time.

The action was raised in the Court of Session by lawyers before the three-year deadline for raising such cases had elapsed.

The case is being handled by solicitors at Digby Brown's office in Dundee.

The exact amount that Mr Gowans is claiming for is not yet established, but it is thought to be a five-figure sum.

A spokesman for Digby Brown said: "This is another case which highlights the importance of robust workplace safety measures.

"Anyone asked to work with machinery should have the tools and training to do so safely."