2 Greenkeepers advised to stock up during expected icy conditions Forecasters are predicting this winter's first serious, and widespread snow this week, with some predicting sub-zero temperatures for much of December and January. With this in mind, Bayer advise greenkeepers to stock up and avoid getting caught out.

"Snow cover and heavy frost can increase the risk of Typhula incarnata causing Grey snow mould," says Bayer's Technical Manager Colin Mumford. "It can also cause Fusarium patch (Microdochium nivale) to develop into Pink snow mould, should greens be subject to a covering of snow."

He adds that during intense periods of snow, a delivery of product could be significantly delayed, so it's important greenkeepers make sure they have enough stock in their possession, ready to be applied either in advance of snow reaching their course, or as soon as the thaw kicks in.

Colin notes that the chances of developing snow moulds are significantly reduced if the green has been looked after appropriately prior to the snow fall. "If Fusarium patch has been prevalent in the run up to the cold weather, the likelihood of it recurring in the winter is increased."

The activities associated with autumn renovation put a great deal of stress on the turf. Colin explains that ideally greenkeepers will maximise their maintenance programme prior to this period. "Activities include applying the correct fertiliser, avoiding heavy top dressing, removing any fallen leaves in the autumn, adjusting the height of cut as well as reviewing the sward composition." 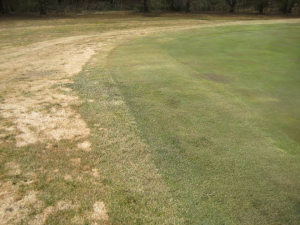 As well as carrying out the appropriate cultural practices in the run up to the cold weather, Colin advises greenkeepers to apply any fungicides preventatively before the first snow when the ground is not frozen. "Providing the label instructions are adhered to, this treatment should protect the turf while the snow is lying on top."

While this is the ideal, it is not always possible as snow can come very quickly and without much prior warning. Colin explains that this is where Bayer's Interface® is particularly useful.

"Interface® should be a fungicide every greenkeeper has in his armoury, especially in a changeable and unpredictable climate. It can be used at any time of the year, and given its combination of preventative and curative properties, it's a reassuring presence in a season which can bring a multitude of weather conditions." He continues to say that if sprayed before the snow falls, Interface® will protect the turf while there is snow cover, however if a sudden fall occurs before the greenkeeper has had a chance to treat the green, an application of Interface® should eradicate any signs of disease that may appear when the thaw sets in.

This and further news is available at: www.press.bayercropscience.com.

Interface® can be purchased from the Pitchcare shop