The fairways are divoted, the greens double cut, and the bunkers will be raked to perfection. This week Royal Birkdale will host The Open for the 10th time, taking it to joint second in the list of most used venues on the current Open rota. 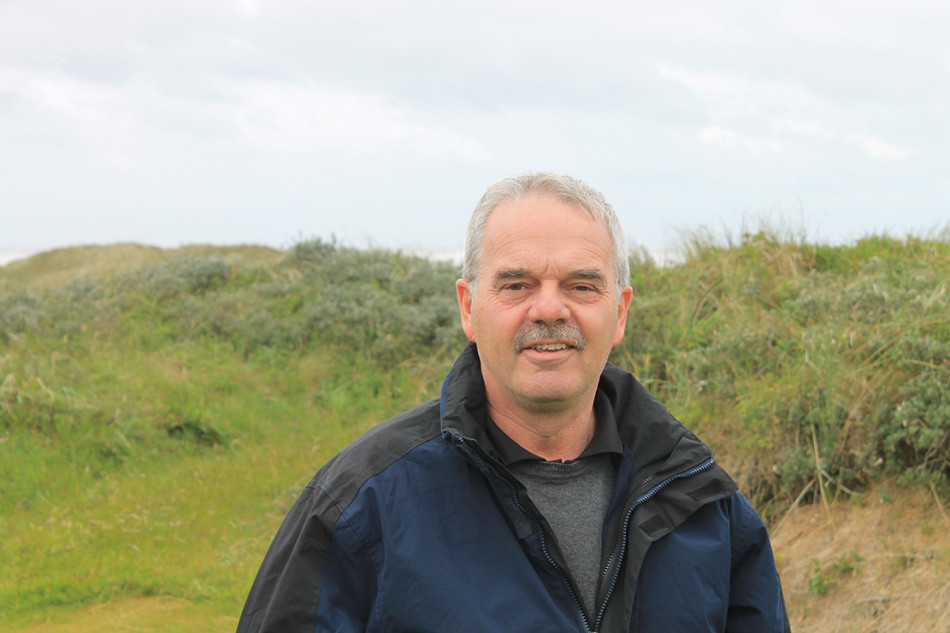 As the world's most prestigious golf tournament arrives in Lancashire, the course will once again have been prepared by a team of highly-trained greenkeepers who are counted among the almost 6,000 members of the British & International Golf Greenkeepers Association.

Chris Whittle is Course Manager at Royal Birkdale, and the 63-year-old is preparing the course for an Open for the final time.

He said: "I can't deny that expectations are higher than ever. But preparations have been smooth so far, and we're confident of presenting the course in a better condition than ever before. Let's just hope we get the weather to allow us to show off everything Royal Birkdale has to offer."

This will be Chris' fifth Open, having prepared the course for the event twice before, in 1998 and 2008, and also at Muirfield in 1992. His first Open experience was as Deputy Course Manager for the 1974 Open at Royal Lytham & St Annes.

Supporting the home team during the Open itself will be a team of over 50 BIGGA members, drawn from clubs all over the UK and further afield, who have volunteered their time freely and will be on hand to assist with duties such as bunker raking.

Additionally, BIGGA members across the country have worked hard to prepare their courses for Regional and Final Open Qualifying competitions in the build up to this week's main event.

The BIGGA Volunteer Support Team is invaluable to us," said Chris. With their help I can be confident that everything out on the course is under control, allowing the home team to undertake all the duties that come with hosting a Major tournament.

Each year the R&A requests the assistance of BIGGA members with hosting the championship, meaning BIGGA members have witnessed some of the greatest duels in golf first hand.

During The Open you can keep track of what's going on out on the course by following @BIGGALtd and using the hashtag #BIGGASupportTeam.

Four times greenkeepers saved the Open… and the time an Open champion saved a greenkeeper!

Bobby Jones was an incredibly popular winner of The Open at St Andrews, as the American amateur was carried shoulder high through the crowd.

At the prize presentation he made a gracious acceptance speech, saying: "I would rather win a championship at St Andrews than anything else that could happen to me. You have done so many things for me that I am embarrassed to ask one more, but I will. I want this wonderful old club to accept the custody of the cup for the coming year."

Bobby Jones had asked the Royal and Ancient to look after the Claret Jug, but within minutes a heart-stopping realisation struck the throng - the trophy was missing.

Police set up roadblocks in an attempt to prevent the perpetrators from escaping with the silver trophy, but all the efforts of law enforcement and club officials was in vain.

The next morning a member of the Old Course greenkeeping staff was making his way out on to the links, as the process of maintaining the course began once again. In the early dawn light he spotted sunlight glinting on something beneath bench close to the R&A clubhouse.

That anonymous greenkeeper had found the Claret Jug, recuing the reputation of the R&A in the process.

A pair of daredevil seven-year-olds had lifted the trophy, then in a moment of clarity realised the enormity of what they had done and decided to hide it and run. 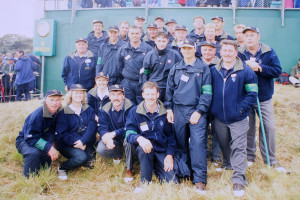 With only seven permanent staff at Royal Lytham, the team was stretched beyond their means as half an inch of rain fell by midday on the third day. With the ground already saturated, it meant four greens were completely submerged and play was abandoned at 1.45pm.

Jack Nicklaus' caddie was heard to say: "The green at the short 5th reminded me of the 17th at Sawgrass. It was perched high above a lake," while Ian Woosnam was particularly upset as he had shot a birdie and an eagle to pull back three shots by the eighth, before being told his score would not count.

Delayed by the weather, The Open became the first in history to record a Monday finish, but things could have been even worse if not for the efforts of the greenkeeping staff and other volunteers who worked hard to bail out the competition.

The fire brigade began pumping out the tented village, while the greens team and members of the club were seen pushing water off the putting surfaces using the back of wooden rakes.

The task of repairing the bunkers was given to the volunteers from BIGGA and Head Greenkeeper Jimmy McDonald said: "They did a great job, starting at 4.30am. It was such a big undertaking after all that rain and it needed an experienced greenkeeper to put the bunkers back in the right condition."

Even Seve Ballesteros, who benefitted from their hard work and claimed his third Open Championship, found time to join the greenkeepers for a photograph with the trophy and thank them on behalf of the competitors.

Returning to Royal Lytham, this time in 2012, and going into the tournament there were fears that a downpour could derail the whole event, with the water table already high following a horrendous summer. Throughout Thursday night and into Friday morning the heavens really opened, and thinks looked bleak.

"The golf course is on the edge of unplayable," bemoaned Graeme McDowell. "I saw one bunker in particular, left of the 16th green, if you hit in there, there's nowhere to drop and there's a foot of water. That's not golf."

Head Greenkeeper Paul Smith described watching the rain clatter down as "probably the worst feeling of my life", but the tireless work of his extended team and the BIGGA Support Team, called in to help in the early hours of the morning, ensured that miraculously play began on time on the second day.

"Our spirits had truly been dampened and although feeling numb, the whole team rallied with pumps, pipes, generators and squeegees to clear the course and tented village of standing water." 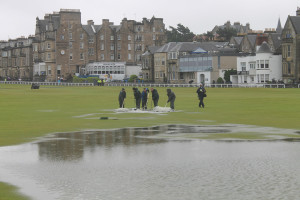 "Armageddon-like" winds hit St Andrews during the 144th Open, as storms led to another Monday finish.

Greens, fairways and bunkers were flooded and an army of greenkeepers got to work clearing the standing water.

"It has been a very tough morning," said R&A chief executive Peter Dawson. "It started raining before 5am and we've had 20mm since then, 12mm of those in a very short time period and the course started to puddle and flood in certain areas. But if there is any course which can take this is the Old Course at St Andrews."

Images of the St Andrews greenkeepers sweeping water into the iconic Swilcan Burn were beamed around the world and they were widely praised for their amazing efforts in ensuring play could resume so rapidly after the deluge.

However, strong winds the following day caused another suspension of 11 hours, of which the greenkeeping team could do nothing about, leading to only the second Monday finish in Open history. 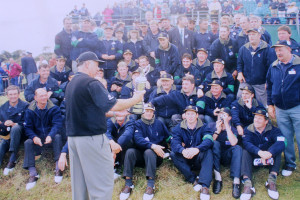 And the time an Open champion saved a greenkeeper….

At Royal Birkdale in 1998 it was American Mark O'Meara who secured his second Major of the season by outlasting Brian Watts in a four-hole aggregate playoff.

That late finish caused some incredible drama, but for BIGGA Support Team member Russell Black, it meant he was stranded after the shuttle bus left for the hotel without him.

Thankfully, help was at hand in the form of the new Open champion and his wife.

Russell, who was working at Westerhope at the time but has now been retired for three years, said: "I was assigned to Mark's group for the final round of the Open. His wife accompanied our group, and at the end she gave me an umbrella and a ball.

"We got held up with all the crowds and when I came to look for the bus, they had all left me."

With no means of getting back to their hotel in Southport, both Russell and Kevin Bell of Elmwood College, were left wondering what to do next.

Thankfully, the new Open champion and his wife came over and offered a helping hand.

"They were concerned that I had been left stranded," said Russell. "They asked if there was a problem and I told them I had missed the bus. Mark's wife said 'don't you worry about that, come with us'. I couldn't believe it, the guy had just won the Open."

The new Open champion sat in the passenger seat, with the Claret Jug on his knee, while Russell and Kevin jumped into the back seat.

"When we arrived at the hotel I went inside and said 'lads, you wouldn't believe who I have just got a lift off'. They didn't believe a word I said."