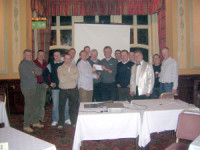 On Tuesday evening 24th January 06 the first Baileys of Norfolk & Sheriff's Greenkeepers charity Quiz night, was held at the Swallow St. George Hotel opposite the exhibition hall. Free food, free drink and the prize money being provided by Baileys of Norfolk.

The quiz was run by John Farrell who compared in his sparkly jacket & Nigel Fahey who did the shouting.
The enthusiastic participants arrived from 6.30 onwards representing clubs from across the UK. After several questions to the organisers before the start, the anxious enquirers were assured that there would be absolutely no questions on Agronomy whatsoever. About 100 contestants attended, split into 24 teams.

The nominated charity was the National Deaf Children's society. Martin Samuel gave the half time presentation on behalf of the charity. The amount raised by the evening's activities was £565.

The cash prizes for the first, second and third teams were; £200, £100 and £40 respectively. All three of the winning teams generously donated their winnings to the charity after the prize giving. A charity raffle was also held. The first prize being a signed cricket bat. George Barr from Worthing GC being the winner. A good time was had by all, and this event will be repeated next year.