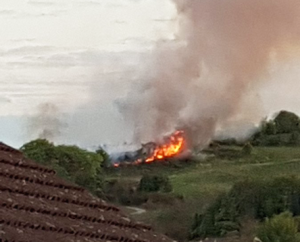 A greenkeeper has blasted mindless vandals who deliberately set fire to a Barrhead (Glasgow) golf course twice in four days.

Emergency services were called to the course last Monday and Thursday to extinguish the flames, which caused smoke to billow across the Fereneze Braes.

A patch of grass at the 11th hole of the course was set ablaze in the first incident, while gorse which surrounds the greens was torched just a few days later.

Mr Wilson told the Barrhead News of the frustration he felt when he saw the damage.

He said: "It's a very important part of the golf course they've burnt. Maybe it's an act of maliciousness, I don't know.

"The club's got a history during the long summers of people coming up and having recreational fun.

"It only takes a match and the wind does the rest at this time of year. It just makes it looked scarred - it's unsightly.

"They know for a fact what's going to happen. They know when you get a dry area it will be a piece of cake to ignite."

Although the golf club will not have to cover the costs of any damage, groundsmen will need to cut down the affected areas during the winter months - something which irks the greenkeeper, who spends each day trying to make the course look its best.

Mr Wilson added: "We don't mind people coming up to enjoy the views but it's a different matter when you get some kids or grown-ups who are having a drink and decided they will start a fire, without thinking of the consequences.

"The golf course is my pride and joy. It's my livelihood and I take great pride in looking after this place."

An investigation into the arson attacks has been continuing.

Police said they will be upping patrols in the area to try to prevent any further incidents.