Two of the longest serving greenkeepers in the UK are set to retire after devoting almost 100 years between them to their respective clubs. 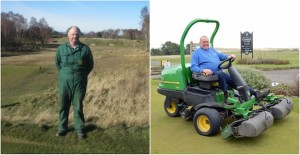 George Thompson of Goswick Golf Club and Derek Roy of Nairn Dunbar Golf Links will be ending a lifetime of early wake-up calls over the next couple of weeks, with celebrations planned to thank the pair for their dedicated work throughout the years.

There's something incredibly special about April 6, 2016. Not only because it's the day George will be retiring from his role has head greenkeeper at Goswick, but that it's 50 years to the day since he started working at the course.

Born and bred in the hamlet, situated eight miles south of the Scottish border, George's parents both worked at the club and after he left school at 15, he started his apprenticeship on April 6, 1966, before taking over from his Dad as head greenkeeper in 1977.

Since taking over the role, he has witnessed Goswick become one of the leading golf courses in the north-east of England - shown when the course was awarded Regional Open Qualifying from 2008-2012 which it will get again from 2018-2022 - a feat George looks back on with the most pride.

"I'm proud to have been a part of the club building a name for itself to become one of the iconic clubs in the north-east of England and the first day of Regional Open Qualifying, when all the players were arriving at the course and then teeing it up, was the pinnacle for me," he said.

"I'm just going to potter around now. I've got two trained gun dogs and I'm very keen on my shooting so that'll keep me busy. But I won't miss getting up at 4.45am in the summer time, that's for sure!"

A golf day was arranged for today (March 26) to celebrate George's half-century at the club, with an evening function planned to celebrate his remarkable achievement.

Just like George, Derek Roy epitomises that dedication to a single workplace as he retires on March 30 after 49 years at Nairn Dunbar Golf Links - 44 of which were in the role of Head Greenkeeper.

As a result, he has been in charge of the prestigious tournament set-up at the Highland venue, overseeing the Senior Open Amateur, Senior Home Internationals, Scottish Boys, Scottish Ladies and World One-Armed Championship among others, while he was also heavily involved in the construction of three new holes at the course.

But Derek's time at Nairn Dunbar hasn't just been about work-related achievements. With a current handicap of five, he has his name on the club's honours board as a past club champion, with members and staff alike wishing him all the best in his retirement.

"Derek has an absolute passion for the course and is hugely respected by all the members," said Golf Club manager Robert Kay. "On the occasions that we have been out on the course together, many members have openly praised Derek for the condition of the course and he should feel a real sense of pride when receiving such positive feedback. On behalf of all the staff here at Nairn Dunbar I would want to wish Derek all the best on his well-earned retirement."

For the full article, visit www.bunkered.co.uk.