0 Greenkeeping in Denmark - the war against Poa

Greenkeeping in Denmark - winning the war against Poa I came back to the UK for personal reasons and spent 2 years at Moor Allerton GC, but then Lausanne contacted me again. The World Championships were over, they had remembered the work I'd done in my short time with them and asked me to return. I did and spent my next 13 years there. I then left Lausanne to develop a new venture which, unfortunately, had its work permits withdrawn. So I was in the middle of Europe looking for a job. I came back to the UK, did some work at Nuneaton GC, but soon realised that I was treated with more respect on the continent than I was in my home country.

After 3 years, I took the family on the travels once again, and ended up in Denmark. The Rungsted course is 18 holes, about 60 hectares in size, built in 1937 by C.A.MacKenzie.

Since arriving here I have been focussing on the greens and, in particular, the war against Poa Annua. In last year's August edition of Greenkeeper International I read an article on Disease Management difficulties in Sweden and the Netherlands. I feel that my own experiences will reassure my Scandinavian colleagues that there is a possibility of managing greens without chemicals, although disease will always be a problem in the early stages on poa greens.

There are many sceptical people out there who say you cannot eradicate poa annua from your greens. I wish to contradict that statement and offer hope to all those greenkeepers, young and old, who still believe that you can grow fescue and bent turf on a green today at the expense of poa.

The sward composition today on the greens is starting to take on another look. On some greens when you look at them in the morning dew you can see pale green patches half a metre in diameter. These are patches of pure fescue that have established mainly in the last 15 months. The rest of the sward is a mix of poa and bent. I would estimate that, on some of the drier greens, we have 40% fescue/bent now established and, on the wetter greens, 20 to 30% of mainly bent grass. This is a huge transformation from the wet boggy poa greens I inherited back in 2000.

The 5 cm of thatch is history as, in the last 3 years, we have hollow tined with 16cm tines a total of 12 times throughout the playing season, and applied 900 tonnes of top dressing. What was once thatch has now been replaced by a layer of topdressing some 7cm deep. You could say that we are actually building a new green on top of the old soil one. The result of this work is we now have firm dry surfaces on most of the greens but we have 4 greens that need some extra work on them to help dry them out.

Recently we had 33mm of rain a few hours before a competition. Members turned up expecting to find the course unplayable but the only areas not waterlogged were the greens which we had managed to cut with a triplex. We may still have slow internal drainage but now at least the surface water can get away thanks to the topdressing in the top of the green profile.

The first phase of our programme to rid the greens of the thatch is now complete. The next phase is the hardest part - the establishment of the new seed. The success of this procedure is dependent on the fescue and bent being able to grow in dry conditions.

When I first started overseeding the greens, 3 seasons ago, the new seed was not surviving because of the wet surface due to the thatch holding the water. As the greens were becoming drier I was getting more seed to establish, but still losing a fair percentage. I then read an article by Henry Blechelet of the STRI on overseeding greens and made contact with him to discuss my situation. Henry was marvellous and came back with some sound advice that I have followed this year with great success. The main advice was not to disturb the new seed once it had germinated. I asked Henry what he meant by disturb? Did it mean not aerate? What he meant by disturb was mechanical removal of the leaf blade and aggravating and bruising the plant, so no verti-cutting or top dressing for 6 weeks following the germination of the new seed.

In my situation, this season, I had to top dress following overseeding but, if you have to top dress during this establishment period, be sensible about it. Greenkeepers used to pull a drag mat across a green by hand 30 years ago. I am not suggesting that you do that today, but we pull the mat with the bunker machine very slowly, just once across the green surface, then off and let the grass grow through the topdressing. This way we eliminate the bruising and aggravation that a mat can cause to the new seedling. 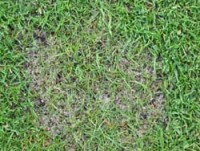 I have 1100 members who, like some of yours, were not over impressed by their playing surface this spring but, by communicating, writing reports and by taking the time to discuss with them out on the course, they understood what our aims for the greens are. We are looking to the long term, not a quick fix short term solution. (If you want a member to read a report leave a few copies in the bar area as well as on the information board) This whole process at Rungsted could never have achieved so much without the understanding and support of the membership and, if you do not communicate with your members, you would probably never get past your first season doing a renovation of your greens on the scale that we have done.

So, how do you stress out the poa without losing you're playing surface altogether? It is a very fine line that you walk. The one thing that poa loves is fertiliser and water and lots of it, so this is where you take control.

Water is only applied just before the greens start to show signs of wilting. Our greens used to receive 200kg of N/Ha per year. The first year we were down to 120Kg of N/Ha, last year 90Kg of N/Ha and this year I am looking at 70Kg of N/Ha. This is probably still a lot of fertiliser in some people's eyes but you cannot just shut off the nutrient and water supply and expect fescue and bent to take over. I am the first to admit that we still have a lot of poa, but this is a long term process and you have to try and push the balance in favour of the finer grasses and let the poa struggle. And, at these levels of nutrient, it struggles. Regular applications of seaweed helps with the rooting and establishment of the young fine grass plants. We aerate with 8mm solid tines every 2 weeks right throughout the playing season to keep the surface open and allow the new grasses maximum chance for establishment. If anyone should follow a similar programme you will have challenging periods as you try to keep the nutrient balance right in favour of the fine grasses, and you will have to be very patient as it will take at least 5 years before you will start to see a dominant of fescue /bent in the sward. It is a slow process and we are so dependent on the weather that the process may take even longer if we have wet seasons. The important thing is to keep focussed and believe in what you are doing, and the results will follow.

I met a European manager of a large company within the industry this year. I was explaining to him what we were trying to achieve with the greens by changing the grass types. He was absolutely amazed and asked but where I learned such a technique and can other people learn it. I simply replied that this is called Greenkeeping, it is not rocket science but just following traditional greenkeeping practices that have been in place for 100 years.

I would also like to comment on the issue of green speed. The greens at Rungsted never go below 5mm. Obviously the new generation of A4, L93 bents are a different story that demand being mown at 3mm and lower. The speed on our greens comes by producing a firm dry surface and the more top dressing applied the more the surface will give good pace. In addition, as the sward composition changes and the poa starts to be in the minority, there are less seed heads and therefore less resistance on the roll of the ball. A fescue green cut at 5mm will give as fast a surface as a poa green mown and groomed at 3mm.

If you are attempting to alter the botanical composition of the sward, as in our case, you have to give the new seedlings chance to mature and compete. They need as much leaf surface area as possible to help with photosynthesis and root development. Attempting to establish fescue and mowing below 5mm will be a waste of time and effort.