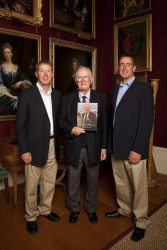 Packed with wisdom and anecdotes from the former St Andrews Links course manager's impressive career, 'Walter Woods: memoirs of a greenkeeper!' is a must-read for any greenkeeping professional.

The 146-page, full-colour tome traverses Walter's first greenkeeping job at Tillicoultry Golf Club in Clackmannanshire, Scotland, his time at 'the home of golf' together with the four Open Championships he oversaw there, and his instrumental role in the creation of the British and International Golf Greenkeepers' Association (BIGGA).

Walter, 76, says he hopes the book - which has been published by Toro to be freely available to greenkeeping professionals through BIGGA - will be of use to his industry peers. "When I retired I had nothing to do and there was this computer staring me in the face," he recalls. "I've had an interesting career and have a lot of memories, so I just started writing. It was hard work, but people have been very positive about the finished book. I hope it's useful and enjoyable for anyone in greenkeeping."

Greenkeepers keen to learn from Walter's recollections can pick up a free copy, some of which will be signed by the man himself, from the BIGGA stand B23 at Harrogate Week this January. Further copies will be available from BIGGA during and after the show. Having championed training and education throughout his career, Walter wanted to make his legacy freely available to greenkeeping professionals - which is where turf machinery and irrigation systems giant Toro stepped in.

The Toro Company's Barry Beckett helped Walter realise his ambitions and publish the book. As he explains: "Walter has been one of the stalwarts of the greenkeeping fraternity for many years and we felt it was important that his memoirs were captured for future generations to read and learn from; therefore, in many ways, this was an extension of our continued commitment to learning and development. Walter and his generational peers have witnessed, and have been instrumental in influencing, the changes that the golf industry has gone through over the past 50 years. It's important that we all recognise and record their contribution."

'Walter Woods: memoirs of a greenkeeper!' was officially launched at a Toro 'Turf Professionals' networking event held at motorsport mecca Goodwood for some of the UK's leading greenkeepers recently. Here, Walter was united with his St Andrews Links successors, director of greenkeeping Gordon Moir and course manager of the Old Course, Gordon McKie, as our picture shows.

To get your free copy of Walter's book, visit BIGGA stand B23 at Harrogate Week turf management exhibition this 24 to 26 January - times and days of signings will be announced in due course. BIGGA members attending the Continue To Learn education programme as part of the show will also find a complimentary copy in their delegate pack. For copies of the book after the show: new members will receive a copy in their welcome pack; existing members can visit www.bigga.org.uk to find out how to order.