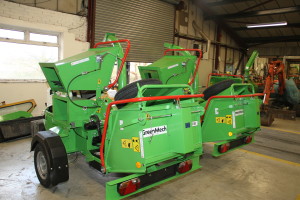 A recent press trip to Alcester, in Warwickshire enabled me to visit a family run business, GreenMech, who last year celebrated a double milestone of 20 years manufacturing wood chippers and Chairman Tony Turner's 50 years in engineering.

Tony formed GreenMech Ltd in 1993 to design, manufacture and market a British range of wood chippers and shredders for professional arborists, landscapers, contractors and local authorities across the world. Over the last two decades, GreenMech has successfully developed a unique and innovative range of professional machines which are now exported to 28 countries. Among many significant achievements is a prestigious Queen's Award for International Trade in 2005 and a second for Innovation in 2009.

Very much a family-run enterprise, in 2002, GreenMech enlisted Tony's son, Jonathan, in the role of Managing Director. Following this appointment, Jonathan's cousin, David Turne,r became Operations Director; and now Tony's grandchildren, Guilhem Pages-Turner and his sister Emma, head up the French side of the company. Emma and Guilhem represent the third generation of the Turner family to become involved in this award-winning business.

The company now employ over 70 people, including three new engineering apprentices. Export sales have doubled since the financial crash of 2008 and, in tandem with that rise, the world-wide sales and support service, through appointed dealerships across four continents, continues to flourish.

GreenMech have long been at the forefront in the development of wood chippers, green waste shredders and related arboriculture technologies. 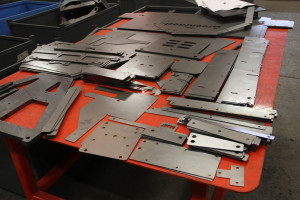 The company have also formed a good working relation with Orange Plant, also on site to demonstrate their Carlton stump grinders. Orange Plant buy a lot of GreenMech products for hiring out, due to their reliability and second hand values. Once they have done a certain number of hours, they are sold off. It seems to be a good working relationship, enabling both businesses to offer a good service and product range for their customers.

The press gang, which included many of our regular industry magazine titles, were invited to visit the factory and see how these GreenMech products are developed and made. Our tour began with an introduction to key staff, a history of the company and the development of their Mill Industrial Park factory site.

The company started in 1963 when Tony started Turner Engineering which made flail mowers, various forms of agriculture machinery, tow tugs and even invalid cars and out front cylinder mowers. However, it was1993 when Tony saw the potential of manufacturing a bespoke UK British made wood chipper. At that time, most chippers were tractor mounted machines and produced abroad. Tony based his design around a powerful, sharp chipper that could speed up the time of chipping timber brash whilst, at the same time, being more manoeuvrable, and easy and safer to operate.

The chippers became more popular with tree surgeons and local authorities due to the fact that these shredders/chippers could reduce the amount of bulk material (branches into chips) by a ratio of 6:1, thus reducing the transport costs of waste material.

Another factor that helped promote the use of chippers was the introduction of regulations relating to the commercial burning of waste and cost of landfill tipping charges. Using chippers reduced these commercial tipping charges dramatically, also the contractors found a new use for their waste chippings, they could be recycled and put back as bark mulch on shrub beds. 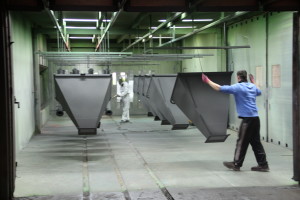 Martin Lucas, Sales Director, gave us a guided tour of the factory; we began at the very start of the manufacturing process, where we saw raw sheet metal waiting to be fabricated using laser cutting, welding and pressing processes to manufacture the main chassis and body parts of the chippers, which are then cleaned and painted, The company pride themselves on the quality of painting they undertake, having invested heavily in their powder coating paint shop.

Each formed piece of steel is shot blasted, cleaned and painted, applying both a primer and top coat for durability. The company do buy in engines, wheels and other special parts, all of which are then sorted into batches ready for assembly. They run four production lines enabling the factory to produce between 15 to 20 products a week. This yea,r GreenMech has been particularly busy completing well over 1000 products for market. 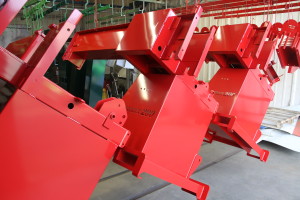 We then walked by the different assembly areas seeing the transformation of the product from base chassis to the finished product. We finished off the tour in the design office. Each and every GreenMech machine is hand built, tested and cleaned before being despatched for sale.

The company now offer fifteen different chippers, ranging from their popular CS100, designed with the professional landscaper, arborist or parks manager in mind; it makes easy work of a wide range of wood waste and vegetation.

The popular Arborist 150 is a simple-to-use and cost-effective road tow chipper, designed in a traditional in-line format. Part of GreenMech's much-admired Arborist range, the Arborist 150 has been particularly designed for disposal of waste brash, as an increase in the market for firewood means that useable wood is kept for log production.

The SAFE-Trak 19-28 is designed with GreenMech's award-winning patented track extension system, allowing massive ground clearance of up to 550mm, enabling access across the most difficult terrain. This pioneering feature makes it a popular machine for de-veg contractors working on power line and railway track maintenance. And finally, combining the versatility of both a chipper and a shredder, the award-winning EcoCombi 150 comes with a 35hp water-cooled diesel Isuzu engine and uses GreenMech's patented Disc-Blade chipping/shredding system. Designed with power, strength and versatility in mind, this trailed unit has proven popular with contractors and local authorities who need to process a mixture of both wood and green waste.

Some of the key selling features of all the chippers and shredders is the robustness, silent operating levels and safety features, along with their specially designed cutting blades that can easily be replaced and sharpened.

The revolutionary and patented Disc Blade system, designed and manufactured by GreenMech, is a standard feature on their machines. Disc-Blades are also particularly good for processing sinuous material such as palm fronds very effectively, whereas all other chippers which use conventional straight blades lose their sharp cutting edge very quickly. It provides a more efficient and cost effective alternative to conventional cutting devices, offering a reduction in costly down time, less susceptible to damage and reduced noise levels. Although the Disc-Blades mounted on the flywheel have a fully sharpened circumference, only about a 1/3 of the cutting edge on each disc is in use at any one time. When this edge becomes worn, the blade is rotated to provide a new sharp edge, without removing the blade, meaning less down time and a longer period between sharpenings, compared to flat blade or flail systems.

After a quick lunch, we were soon back outside watching a demonstration of a couple of GreenMech chippers and shredders along with a Carlton Stump grinder stump grinder. All in all, we all had a very informative day. It is always nice to see a UK business doing well and producing a high value range of home made products.