by Rebecca Saunders
in Industry News
on 04 Nov 2013 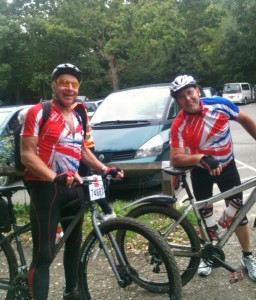 UK Chippers and Shredders manufacturer GreenMech saw two employees once again pedal their way to raising money for charity. This time Reg Rooke and Daniel Shepard burned up the miles for the British Heart Foundation.

Reg Rooke, 50, is a design engineer for GreenMech of 4 years standing and Daniel Shepard, 38, has been the quality manager for the past 3 years.

Ever the double act, Reg does the hard work cycling whilst Daniel carries out the very important role of driving the support vehicle and acting as on-site mechanic.

The pair do a lot of cycling for fund raising at home and abroad and are usually joined by Daniel's father-in- law John Sulley.

The event was organised by the British Heart Foundation to raise around £200,000 in fact over £300,000 was finally raised by the competitors who all pay an entry fee of £35 each with over 3,000 taking part.

The gruelling 75 mile trek on Saturday 21 September took them from London to Brighton via green lanes, bridleways and tracks but no real roads. The weather was kind to them, thankfully, and they completed the journey in 8½ hours, with only three breaks.

50-years ago, founder Tony Turner developed the world's first flail hedge and verge mower and today the company is a leading supplier of wood chippers and shredders for tree surgeons, contractors, groundsmen and local authorities.