by Football Foundation
in Football and Synthetics
on 21 Apr 2019 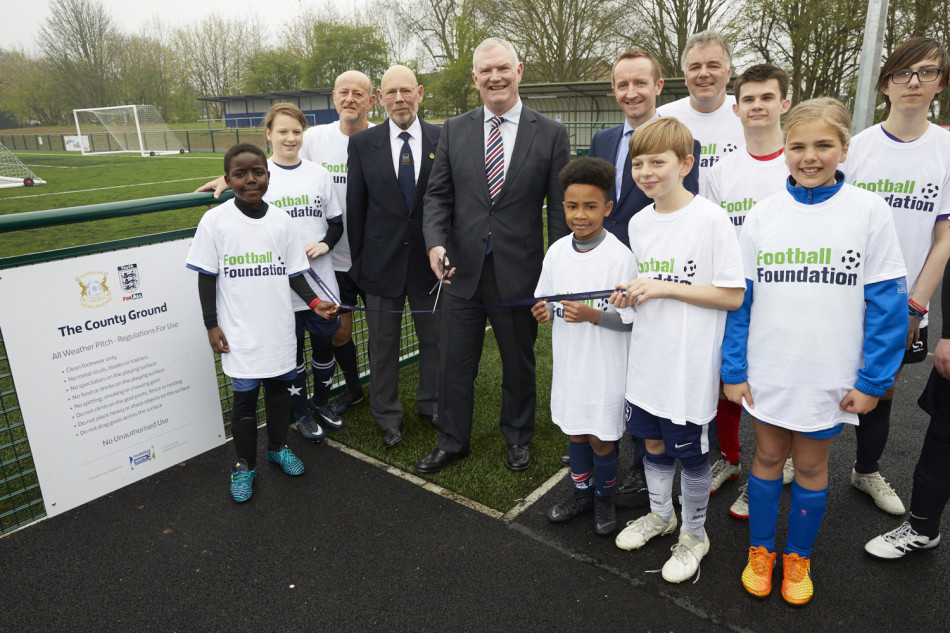 The new facilities were made possible thanks to investment from the Premier League, The FA and government's Football Foundation.

After netting a £794,516 grant from the Football Foundation, work began on the site in October 2018. The grant enabled Hertfordshire Football Association, who are the not-for-profit, governing body of football in the county, to transform their headquarters into a modern facility that can be much more widely used, becoming a community hub for football in the area.

The 3G surface replaces a grass pitch that was prone to waterlogging and rarely used outside of hosting County Cup finals at the end of each season. In 2018 many of these finals had to be postponed due to bad weather, while other usage had to be restricted to protect the grass for use at these showpiece events.

The new artificial pitch now allows the facility to be used week in week out, including regular training for youth players, education courses, competitive matches and community sessions, without any concern of the surface being damaged.

As part of the project the existing clubhouse has been transformed, replacing the dark and dated space with an open modern venue including a cafe and large function room. The addition of two extra changing rooms are also designed to support usage of the public grass pitches situated opposite the site.

The new community football centre and 3G pitch will be used by Hertfordshire FA for coaching, refereeing, first aid and safeguarding courses, as well as numerous community teams including partner club, Letchworth Garden City Eagles (LGCE). The site will be used for training and matches by LCGE, supporting the club's 42 teams and helping them to further grow.

Stevenage FC's Foundation will also deliver a range of sessions at the site, from school holiday soccer camps for young players to walking football sessions aimed at Over-50s. Stevenage Ladies FC will also be using the venue for training and matches.

Greg Clarke, Chairman of The FA, said: "Football delivers social good, helping to tackle racism and homophobia, as well as enhancing mental and physical wellbeing. It unites communities and the Premier League, The FA and Government working together to fund the Football Foundation and deliver facilities like this is very important.

"Parents introducing their children to football want to know that there is a good structure with excellent coaching available and facilities like this allow kids to come and learn the game and play it all the way through to retirement. The whole community in Hertfordshire, at all stages of life, can now come together to play football at one hub."

Karl Lingham, CEO of Hertfordshire FA, said: "One of our goals at Hertfordshire FA is to increase the quality and quantity of football facilities, providing more opportunities for all to play the game. We work hard with our partners to see these developed across the county and are extremely proud to open our new facility here at The County Ground that will transform how this site is used.

"This is the fourth new all-weather pitch to open in Hertfordshire since the start of this season. These facilities will help to significantly increase the number of people who are able to play the game on a regular basis, delivering valuable benefits to the local community in terms of health and wellbeing for many years to come."

Brian Curtis, Chairman of Hertfordshire FA, said: "We would like to thank the Chairman of The FA, Greg Clarke, for officially opening this fantastic new facility. In the past our pitch could not be used as often as we would have liked, but we can now look forward to an exciting new future for the County Ground where activities will take place here every day of the week. This is now a real hub for football and we are grateful to the Football Foundation for their significant investment and support."

Paul Thorogood, Chief Executive of the Football Foundation, said: "The support of the Premier League, The FA and government enables the Football Foundation to help improve community sports facilities like this one across the country. Their funding has played a key role in delivering this new all-weather pitch and Community Football Centre and I am delighted for everyone associated with Hertfordshire FA.

"This is one example we want to make people in Hertfordshire aware of, that they have the kind of quality pitches and changing rooms that are taken for granted in other counties. We will continue to support projects nationwide, but we cannot do this on our own, so we are encouraging organisations in the area to join our movement to deliver quality football facilities for people in Hertfordshire once and for all.