4 Grounds for approval at Lancs 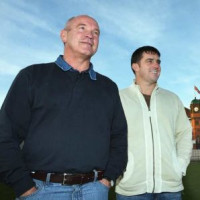 Matthew Merchant probably wouldn't be Lancashire's new head groundsman if it wasn't for Pete Marron's liking for the odd pint.

Marron, who next month leaves the job he has held at Old Trafford for 25 years to become a consultant, was a regular visitor to the Quadrant pub, owned by Merchant's parents, just down the road from the ground.

He offered the then 15-year-old Matthew work experience, and took him on the staff in 1990. Since then Merchant, now 34, has worked his way up, becoming Marron's assistant in 2004 and will become head groundsman at one of the world's most famous cricket venues in January.

"Pete rang me up one day and asked me if I was working, and when I said no, he asked me if I wanted a job," explained Merchant. "I said yes, put the phone down and realised I was still at school!

"I probably would have ended up working in the pub if Pete hadn't offered."

Now father-of-two Merchant, who lives in Sale Moor, has a huge job on his hands after the club decided to promote from within. Not only does he have the task of following one of the most respected, and often outspoken, groundsmen in the game in Marron, he will be in charge of turning the square at the end of next season. That in turn will cause more work at the outgrounds, which will host most of Lancashire's games in 2010 while the Old Trafford changes are made.

Then there is the small matter of the £70m redevelopment of the 151-year-old ground.

But he will have help from Marron, who will continue to work with the club as a consultant, especially while the square is being turned.

And, having grown into the job over the last 18 years, quietly-spoken Merchant crucially has the local knowledge of Old Trafford, the Manchester weather and also the club's outgrounds.
"I am over the moon at getting the job. I'm really excited but a bit nervous," admitted Merchant, who has played a big role in the laying of the new £600,000 drainage system and outfield and has prepared wickets during his time as Marron's number two.

"Perhaps the word honour is used too loosely nowadays, but it really is an honour and a dream come true to be head groundsman at Old Trafford.

"I know the place like the back of my hand.

"There is a lot to do in the next few years. Pete coming back and still being there in the background is a help, if I ever need any advice, he is there. He is one of the best groundsmen in the country, if not the best."

Marron's reputation was gained by producing some of the best Test match wickets in England but the new man at the helm believes the fact Lancashire do not have a Test for four years could help him.

"It is good in a way because it will give me time to build a bit of confidence," he said. "But I want to produce Test match wickets.

"I think the groundsman plays a big part in a team's success, preparing the right wicket for the team. You can't always do that with the weather we have but you just have to do the best you can."