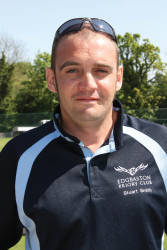 The Edgbaston Priory Club are embarking on a £12 million upgrade to their facilities, with considerable financial input from the LTA.

Laurence Gale MSc talks to Grounds Supervisor, Stuart Smith, about life at one of the UK's premier racquet clubs.

Edgbaston Priory Club is firmly established as one of the country's most prestigious racquet and leisure clubs. It is a private members club with over 3,000 members who regularly enjoy playing racquet sport, keeping fit and socialising.

Its origins date back over 130 years. The club, as we know it today, was formed in December 1964 as a result of a merger between two very long established clubs; Edgbaston Lawn Tennis Club, founded in 1878, and Priory Lawn Tennis Club, founded in 1875. This merger came about after a disastrous fire in May 1963 which completely destroyed Priory's clubhouse, hence the logo; a Phoenix rising from the ashes.

Robert Bray, the current Chief Executive of the club, has been instrumental in developing its fortunes in recent years; there has been a dramatic emphasis on modernising and adding new facilities. During my visit the new Grounds Supervisor, Stuart Smith, was showing me the latest developments in terms of improving the playing condition of the natural turf courts.

Grass courts one to four were having a complete new perimeter drainage system installed, with new kerb edging and new irrigation. Centre court also has had some perimeter drainage installed to prevent the likelihood of flooding during tournaments as, in the past, water run off from the temporary spectator stands would often cause problems. This work should prevent this from happening again.

They start at 6.00am to ensure the courts are all prepared and ready for play before 9.30am.

They work a split shift system; two members of staff will come in at 6.00am and finish at 2.00pm, whilst the remaining two start at 8.00am and finish at 4.00pm. Every morning they carry out the same routine: set all courts, check/empty bins, litter pick amenity areas, tidy beds and borders and water hanging baskets and tubs.

The grass courts are built to the same specification as Wimbledon, with courts built on a gravel raft drainage layer, overlaid with a 50mm clean gravel blinding layer, over which the clay loam soils are laid. The clay content of the loam is 23%, which gives it the playing characteristics required for tennis.

The grass courts are renovated, both in the spring and autumn, with the focus of the autumn renovations on full court repair. This involves ripping out all the dead grass and build up of thatch fibre using the club's own tractor mounted Graden tungsten bladed scarifier.

They complete four passes with the machine in different directions. This produces a lot of surface debris that is removed using their Sisis sweeper and Dennis cassette mowers.

The courts are then topdressed with new loam - Surrey Loams Gostd - to restore levels, and overseeded with a rye grass mixture of Bar Crown, Bar Gold and Fandango, applying between 35-40 g/m2. It usually takes two weeks to complete all the courts.

Germination sheets may be used if weather conditions at the time dictate their need. Once seed has germinated, the new sward will be cut with rotary pedestrian mowers. The courts are aerated twice a week between September and April. A wide range of tines are used to alter the depth and size of holes produced.

The courts will be fed with autumn and winter feeds as and when required, applying a combination of granular and liquid products.

Spring renovations consist of some light scarification work to remove lateral shoots and any dead material, followed by some overseeding to re-populate any bare areas. A dose of spring fertiliser is applied to help kick start some early growth.

The courts are mown with Dennis FT510 cassette mowers maintaining a height of cut of 12mm; brought down to around 9mm for club matches and 7mm for tournaments. They are mown daily during the growing season. All the grass courts have a pop-up watering system and are watered as required.

All grass courts are marked out using a transfer wheel line marker, always stringing out the lines prior to marking, which takes about forty five minutes to complete.

Any weeds are spot treated or removed by hand. Every morning the courts are brushed/dragmatted to remove dew. They suffer very little disease, with only an occasional outbreak of red thread, which is usually controlled by effective feeding.

Pre-season rolling is carried out on the courts in spring, beginning with cylinder mowers, gradually building up the weight until they are able to get their one tonne Bomag roller onto the courts.

Match preparation for the courts involves reducing the height of cut, timing the use of fertilisers, water applications and four to five passes with the Bomag roller before finally marking out.

No water will be applied while the courts are in play. A number of covering systems are employed to protect the courts.

As for the rest of the courts, the American fast dry clay courts need brushing twice a day to redistribute the surface clay materials, and they are watered to dampen them down. The acrylic courts are swept each day and deep cleaned twice a year. The sand dressed carpet courts are brushed daily to keep clean, whilst again ensuring the sand infill material is evenly spread. These courts are also deep cleaned using specialist machinery hired in from Sweepfast. The tarmacadam court is kept clean and washed periodically.

As for machinery, although their shed is crammed full, a lot of it is old and tired. Stuart is, therefore, in the process of seeking funds to replace much of it with new and more effective equipment. They have recently acquired a new Ransomes Jacobsen Eclipse triple mower and a Dennis FT5120 cassette mower.

There are plans for a new garage/machinery shed when the new build gets under way, and the new proposed indoor courts will have a large basement area which will be utilised for storage space.

With over 3,000 members, the courts are in constant use every day. Every year the club also holds the prestigious 'Aegon Classic' tennis event that, this year, has attracted the attendance of Maria Sharapova, along with many other top women players, making it look set to be another top quality tournament.

Under the stewardship of Robert Bray, the club is constantly looking at ways to improve its facilities and has recently been given the green light to embark upon a £12m investment programme to create new world class facilities and secure top class international grass court tennis in the region.

The plans include a new six court indoor tennis centre and a permanent grass show court. The LTA, the national governing body for tennis in Britain, has committed £5m to ensure the development of the six indoor courts, as well as securing a long term world class tournament.

The extension of the Edgbaston Priory Club site will also include new squash, gym and leisure facilities, together with a major refurbishment of the clubhouse. As part of the proposals, the club has agreed terms with Calthorpe Estates to lease an additional four acres of adjacent land on the former Tally Ho! Bowling Club site, on which the new indoor tennis centre will be built.

The designs for the redevelopment of Edgbaston Priory Club have been created by Glenn Howells Architects. Arcadis APS have been appointed as project managers to ensure a safe and sustainable delivery of the project on budget and on time.

Work will commence on the project at the end of June 2011, once a contractor has been appointed, with the aim of completing by August 2013.

"This is a huge step forward for Edgbaston Priory Club," says Robert Bray. "We can now progress with our exciting plans to provide members and the local community with the very best sporting facilities. We would like in particular to thank the LTA for this significant support and look forward to working with them to develop a thriving tennis hub for events, community and performance."

These world class facilities will establish the club as a leader in promoting racquet sport at all levels and secure, for generations to come, the city's reputation as a prominent international tournament venue for tennis, squash and racketball.

This involves renovating the court to aid recovery from the past season, and lay the foundations for the following season in some seven months time.
Where there are a number of tennis courts, it is generally a good idea to gradually take them out of play one, or a few, at a time. This allows play to continue for a little longer, which will, invariably, please the members. If there are too many courts to work on in a sequence then it could look, from a player's perspective, as though the groundsman has been overzealous in closing all the courts at the same time.

Baselines can become severely worn, and it may be appropriate to turf these areas.
The use of germination sheets can be of benefit, particularly on very thin areas. However, care needs to be taken as fusarium can be encouraged due to the increased humidity and temperature that typically occurs beneath a germination sheet.

• Irrigate to 'soften' the soil profile
• Scarify in several (3 or more) directions
• Mow the grass to 6-8mm, removing all clippings
• Aerate by appropriate means - this could be anything from deep solid spiking to at least 100mm depth, to sarel spiking to about 40mm depth, or even hollow-tining. It is important that the court is suitably moist, but not wet, to allow for good tine penetration when carrying out the aeration work
• Overseed and possibly drill the seed into the surface
• Turf the base lines if required
• Topdress: Generally this might range from 1.5 to 3 kg/m²; depending upon the type of aeration work carried out. Work the topdressing into the sward and soil surface
• Irrigate to ensure adequate germination takes place
Ideally, all this renovation will have been carried out by late September - mid October. This should still allow for adequate germination and establishment before cold soil and air temperatures become unsuitable for good establishment.

Following renovation, the court will need to be nurtured from the end of September to December to assist in the development of a compact sward.

Typical work will include the following:
• keeping the grass topped to around 12-15mm, or as desired
• regular drag-brushing
• switching to remove dew
• earthworm control (this may typically be through drag-brushing or chemical control)
• moss control
• watching out for disease and controlling as necessary
• aeration (solid and slit/chisel tines), and
• removing leaves and twigs