Jonathan Calderwood, 38, was head-hunted by French side Paris St Germain to produce tip-top turf at the stadium, but five weeks of torrential rain in the French capital has affected the playing surface 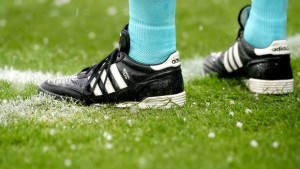 He said: "I am a little bit disappointed as the weather in Paris has been shocking.

"The rainfall in the last month has been the most rain since 1932 in Paris. It could not have been any worse.

"Since our last club game for Paris St Germain, there has been torrential rain every day for five weeks."

Thursday's victory over Ukraine has given Michael O'Neill's men an excellent chance of advancing to the last 16, while the Germans are also set to go through having accrued four points from their opening two Group C fixtures.

Calderwood is cutting the carpet-like surface twice a day to keep it in top condition.

He said he was more prepared for extreme heat to damage the grass. This time last year it was 48C inside the stadium.

But he said: "It is absolutely pouring down with rain."

Despite the weather, the pitch has held up well.

He added: "Everyone is saying it is fantastic, but I know it could be better. But I cannot control the weather - you can only do so much.

"It is such a pity we have not been able to show off our work as well as we would have liked.

"So far all the teams have been very complimentary and hopefully I don't see any reason why that will change for (Tuesday) night."

Barcelona stars Lionel Messi and Neymar said his was the best pitch they had played on.

The football fanatic from Clough, near Ballymena, moved to Paris from Aston Villa, where he won a string of awards for his grounds-keeping.

For the original article, visit www.belfasttelegraph.co.uk.