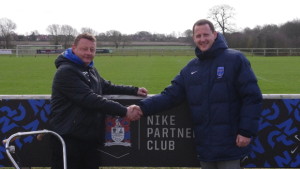 Peter Cope of Sandbach United has won the Cheshire FA Groundsman of the Year Award for 2015.

Peter (pictured left, on the left) scooped the top prize after the pitches at the Sandbach Community Football Centre were deemed to be a cut above.

The Sandbach groundsman has now been put forward to the FA who will send a representative to visit the site and judge his work in the national groundsman of the year award category at Step 7 and below.

This year's Cheshire FA Groundsman of the Year Runner-Up place was awarded to Mike Walker from Egerton FC and Third was given to last year's winner Brian Deeley for his work on the pitch at Knutsford FC.

The three winners will be invited to attend Cheshire FA's annual Awards Evening later in the year where they will be presented with a certificate recognising their efforts.

Nominations were sought from across the county, aimed at people who believed a groundsman was doing an excellent job in ensuring their playing surfaces were of the best possible standard.

Once nominations had been received, Cheshire FA held an internal panel to judge and rank the pitches based on certain criteria. Cheshire FA believe it is vitally important to recognise these grassroots heroes who are essentially the lifeblood of football.

The majority of football in this country is played outside the Football League. Quality pitches are therefore essential for the development of football at every level.

Grassroots groundsman, the vast majority of whom are volunteers, play a huge role in ensuring pitches are in their best possible condition, week in, week out.

The Awards were set up to recognise the contribution of these 'unsung heroes', who work in all weather, all year round, to make sure that thousands of matches can take place on a high standard of playing surface.

Cheshire FA Chief Executive, Simon Gerrard (pictured above right), recently visited the Sandbach United Community Centre to congratulate Peter on his achievement and take in a tour of the fantastic facility.

Simon said: "It's great that groundsman are once again being recognised with their own awards at County level.

"The hard work and dedication of Groundsman is something that is often overlooked so it's brilliant that they have the opportunity to be nominated for awards, especially when they are mainly volunteers.