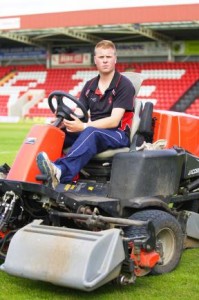 Worcester City may be entering into the unknown when they begin life at Aggborough on Saturday but at least there will be a familiar face to greet them.

Tom Allcut spent around 18 months tending to the pitch at St George's Lane but, following the stadium's closure, has moved across the county to Kidderminster Harriers after being head-hunted by chairman Mark Serrell.

The 19-year-old from Worcester is now the Skrill Premier club's groundsman, charged with keeping the surface in tip-top shape for both Harriers and their new tenants.

It is proving to be a tough task, not least because Kidderminster have not had a full-time groundsman in recent seasons, but one the teenager is determined to meet.

He is also no stranger to having two teams to worry about, having looked after the Lane when Evesham United shared with City.

Allcut said: "I'm used to it because when I was at Worcester we had Evesham so it's back into a routine for me.

"The only difference is I haven't got Paul (Humphries) who used to help a lot, although I have got help from an assistant over there who does part-time work.

"We are trying to get back into a routine and put schedules in place because they never really had any before.