Football groundsman from across the Professional and National Game were honoured at The FA's Groundsman of the Year Awards in Windsor on Wednesday afternoon.

The FA's Facilities Manager, Steve Williams, commented: "Our Groundsman of the Year Awards is a great way to start the new football season and we're delighted to honour these hardworking groundsman from the full football spectrum.

"A good pitch isn't just about money. Our judges were looking at the experience of the groundsman and the amount of time they spend on it, regardless of weather and budget."

"It's always a pleasure to be invited to FA events like this and it's been a thoroughly enjoyable day," said Motson who entertained the Groundsman of the Year guests with tales from his 40 year commentating career before the award presentations.

"You have to congratulate The FA for putting on this kind of day. They're recognising the unsung heroes from across the football pyramid and long may it continue," added the 63-year-old.

Broadbent admits that he became a groundsman by accident five years ago: "I had played for clubs like Farnborough and other teams in the local area but it was only when I joined a side called Selsey that I got interested in becoming a groundsman.

"Their pitch really needed some care so I thought I'd have a go at doing it myself. I progressed from there and here we are, a few years later, with an award!

"I'm shocked because I've just taught myself really so it's a big honour."

Broadbent has to juggle his groundsman commitments at Bognor Regis Town with a full-time career as a Business Manager within the Health Service: "I dread to think how many hours I put in after work. I'm sure my wife has counted them up though!

"Portsmouth have commented on the pitch as well which is just fantastic and their younger sides now use it on a regular basis. We had 96 games on it last year and it will probably be the same story for this season as well."

Richard Cale of Unibond outfit, Garforth Town, picked up two awards by winning both the Northern League Premier prize and the overall Step 3 & 4 title which also included groundsman from the Isthmian and Southern Leagues.

"It's a fantastic job because I love being outdoors and working in different weather. I've always been into gardening, which I got from my Dad, so it's perfect for me and I really buzz off the satisfaction of creating a great football pitch," beamed Cale.

The Yorkshire Electricity employee hadn't even thought about becoming a groundsman until an accident six years ago left him off work and bored: "I broke both my feet and couldn't do anything so I used to struggle over to Garforth's ground, which is just around the corner, and have a chat with the groundsman to get out of the house.

"By the time I was better, he was retiring so I jumped at the chance when he offered me the job. It's a real addiction and I can't imagine life without it."

Bob Stretton of Massey Ferguson FC won the Step 5 & 6 prize while Peter Conroy of Liverpool County FA Youth was the Step 7 and below winner. 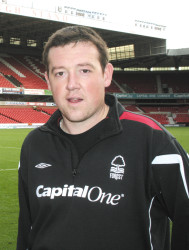