The achievements of First Class cricket groundsmen in England and Wales were celebrated at the ECB's Groundsman of the Year awards dinner recently.

The dinner, at the Quality Hotel, Loughborough, was the highlight of a two-day event, which included a meeting of the ECB's Pitches Advisory Group and a technical seminar, which was held at the ECB Cricket Academy at Loughborough University.

The Pitches Advisory Group comprises representatives from the ECB, groundsmen and match officials. They meet with first class Head Groundsmen twice a year to discuss pitch and playing-related issues.

The awards for the 2004 playing season were presented by its Chairman and former Kent & England Captain Mike Denness. The Groundsman of the Year Award went to Bill Gordon from The Oval, for the second successive year since he succeeded former Head Groundsman, Paul Brind in July 2003.

The winner is decided by the PAG based on grade markings given by umpires over the course of the season and this was the sixth time that the award has gone to the custodians of The Oval since the legendary Harry Brind first won. The award is testament to Bill's skills and abilities in maintaining the benchmark and consistent high standards during a career that has spanned 40 years continual service to Surrey County Cricket Club.

The evening culminated in the presentation of the Textron Trophy for Achievements in Cricket Groundsmanship to a very surprised Geoff Swift.

Chris Wood, the ECB's pitches consultant paid tribute to the former groundsman of Cheltenham College who only took up groundsmanship after being made redundant from his job with engineering firm Dowtys after 31 years service. During his seven years at Cheltenham, he won the ECB Outgrounds award three times and following his retirement in 2001, he continues to maintain the cricket square at Dowtys and offers advice to many local clubs on the upkeep of their wickets. He is also Chairman of the Gloucester branch of IOG.

Groundsman of the Year: Bill Gordon - The Oval 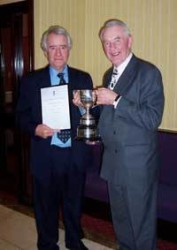 Bill Gordon from The Oval (left) receives the Groundsman of the Year trophy from former Kent & England Captain Mike Denness. 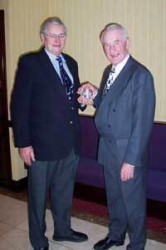