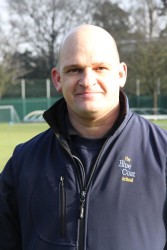 It all started whilst I was still at school, when I began helping out in my spare time on the grounds of a local cricket club where my uncle was a volunteer groundsman.

When I left school I had two choices, either join a YTS (Youth Training Scheme) on a building site or start horticulture! I had never even heard it called that before? Anyway, I went with my gut instinct and found myself starting a two year apprenticeship at Harborne Cricket Club in the summer of 1985. I worked under the direction of James Mead (the current head groundsman at Rugby School), who was the club's groundsman at the time, and also spent one/two days release at college.

Suddenly, I was pulling out these strange stalk things and daisies, sat on my butt on the outfield - where it soon got kicked! A quick word in my ear, and off I went again. I soon learned that I was now removing "bent stalks" and bellis perennis with a daisy grubber! (hand tool) - with my back straight and knees bent, of course. No time to make any chains. Wow, I had caught the bug! We all have to start somewhere.

By the end of the summer, I was cutting out wickets and mowing the outfields, and loving every minute of it.

In 1987, James moved on to pastures new so, at the age of eighteen, I found myself fully employed as the club groundsman, where I remained for two more seasons. In 1988, I had a brief spell as a greenkeeper and then, in 1989, the chance came to work back with my old mentor, as a school groundsman at King Edward VI Independent School. I was back in my comfort zone, where I continued to work for ten years, eight of which was spent as head groundsman at one of their grammar schools.

In 1998, I became head groundsman here at The Blue Coat School, where I reside with my family in the school grounds, a place that always caught my eye as I passed by on my way to work a few years ago.

Known as "The Blue Coat Family", where up to ten staff and their families live in fifteen acres of the school grounds and gardens - you would never believe that we are just two miles from the centre of Britain's second largest city!

My day starts by opening the school gates at 7.30am, and finishes when I shut them at 10.30pm, seven days a week!

The winter pitches consist of two rugby pitches and training grids, five seven a side football pitches, two grass hockey pitches and netball courts, and a state of the art combined sports hall and swimming pool.

We have three grounds staff - myself, Assistant Groundsman, Danny Luton, who has been here for ten years and who previously worked on a golf range and flower stall and attended college before working here, and Nigel Wright, our Gardener for the past seven years, responsible for maintaining gardens, rose beds, planting etc.

Since I've been here, it was decided to work on a project each year to improve on the already excellent facilities and layout of the school grounds. This has included replanting over 3000 daffodil bulbs down the main drive, with the help of the children. They look fantastic as you drive into the school grounds. We are also planting new trees and hedges and refurbishing the existing lawns and rose beds. This is a five year project and is still very much work in progress, fitted in around an already busy maintenance schedule.

How busy? Where do I start?

On the last day of the summer term 2010, as the last child exits the gate (it was shut quick!), the wickets either side of the main square (front field) were sprayed off with glyphosate and left for ten days, ready to be ripped apart with a tungsten tipped scarifier down to 10mm, then tilthed using a sisis tilth rake, going down a further 10mm, removing the top 20mm of dead grass/thatch etc. We tilthed again, down to 10mm, to form a key, relevelled, added seven tonnes of Kaloam, treaded and raked several times to firm and tilth, and applied and raked in Scotts pre-seeder 8:12:8+2mg at 30-35g per m2.

The rest of the square, and our second one, was fully renovated in September, in between other duties.

The back field sports hall, swimming pool, tennis courts and cricket nets are part of a summer camp for 300 children over five weeks during the school holidays.

The front field is out of bounds during the whole of the summer, so we can renovate the four junior winter pitches. We start by tilth raking the centre of the pitches from goal to goal, twelve metres wide, in four directions down to 20mm, again with our sisis tilth rake. Surface rubbish is cleaned up with a Wessex tractor mounted power brush, and Scotts pre-seeder applied at 30-35g per m2.

We then seeded with Barenbrug Bar 7 rye mix at 35 per m2, brushing in with a sisis zigzag brush, then topdressing with 60 tonnes of 70/30 rootzone and dragmatting in. That was one week's work.

With just six weeks to go until the start of term - and seven days for germination - I was saying 'hurry up and grow!' Towards the end of August, another feed of 12:7:7 was applied.

Rugby, football and hockey posts have a fresh coat of paint, courtesy of contractors, as I hate painting!

With just one week to go before the start of term, the summer camp finishes and all of the pitches and training grids are marked out, and goals go up just in time for pre-season training. The term starts and we down tools, and all three of us head off to Saltex for a break!

During September, the remaining work on the cricket square is completed - scarified, spiked, reseeded, fertilised topdressed, luted in and fenced off.

Every year, at the beginning of autumn, the groundstaff are asked, by the pre-prep department, to conduct a talk with the pre-prep children to explain who we are and what we do? We start by laying out some of the equipment on the field - the tractors and mowers soon grab the children's attention! A few tubs of grass seed for the kids to practise their seed sowing techniques, and job done. It's great fun!

Autumn work begins by regular sweeping of the winter pitches to keep leaves at bay. Once a week, the winter pitches are slit, brushed and cut (sometimes we cut twice a week) with a John Deere 2653A triple, football pitches at 20mm and rugby pitches at 35mm, depending on what matches we have on. They are re-marked once a week with a pressure marker. We try to verti-drain every six weeks, depending on weather conditions. Two applications of 4:12:12 are applied over the autumn/winter period, and two of 12:7:7 during the summer. 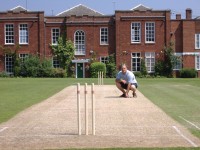 The cricket squares receive a 4:0:8 feed in November, applied at 35g per m2, with another one in January or February. An application of Iron Max+k was applied in December to harden off the sward. Winter height of cut is maintained at 20mm, eventually coming down to 12mm by the beginning of April. Both squares are spiked down to 125mm in November and January with our Verti-drain 7110.

Pre-season renovation commence at the end of February, firstly with our lightest cylinder mower across the square, then tractor weights are put in the grass box and we continue rolling at angles. We then progress to our Poweroll (unballasted), and the squares get rolled in a union jack pattern. The tanks are individually ballasted and we gradually build up until the maximum weight is achieved. The final pass is always down the line of play. This normally takes us into April, with around sixteen to eighteen hours of rolling completed on each square.

Cricket squares are squared up, and the 10ft and centre stump marks are added.

In the meantime, we have quite a few traditional hedges to trim. They consist of yew, beach, holly and laurel and grow around the whole boundary of the site and in the gardens. Hedge trimming takes up to twelve weeks to complete. In addition, the canopies of trees are lifted and pruned.

During periods of bad weather, we also ensure that paths and drives are rock salted and snow is removed.

When the winter term finishes, in the first week of April, all goalposts come down. The pitches are groomed with a sisis Quadraplay and the height of cut is reduced to 15mm. They are then verti-drained. A spring/summer fertiliser is applied depending on the results of our soil analysis. Goalmouths and centres are reseeded.

The 400 metre grass running track, and all other summer term markings, are completed. The long jump pits are prepared and topped up with sand, and the take off boards repainted.

Easter camp is here for a week, while cricket coaching courses will use the nets.

Cricket boundaries are marked out on both fields, and the wicket covers and score boxes prepared. Both squares are verticut every two weeks from April right throughout the summer to remove any lateral growth and dead fibre. A spring/summer 12:0:9 feed is applied. Liquid feeds will also be used throughout the season.

The first match normally commences at end of April, so wicket preparation will start ten days before by lightly scarifying and gradually reducing the height of cut from 12mm to 6mm. The wicket is rolled for around twenty minutes in the morning with, sometimes, a second roll later in the day. They are then marked and covered. Oh, I almost forgot about our holidays - they have to be covered too!

We have a great team spirit here. Even the children see and appreciate what we do! That's the reason why we do what we do". Typical of the school motto; 'Grow in grace'.

History of the school

The Blue Coat School was founded in 1722 as a charity school under the guidance of Reverend William Higgs, Rector of St Phillips Church (now known as Birmingham Cathedral), to offer poor children education under the Church of England Foundation

1913 - New site
A new site was needed for the expansion of a growing school and land was purchased from the Calthorpe Estate in Harborne/Edgbaston.

1914 to 1919 - First World War
Because of the First World War, building was postponed and the land was leased to Birmingham City Council as allotments to increase the home production of food.

1922 - Regained possession
Governors regained possession of the new site and the land was put under cultivation to provide vegetables for the new school and boarding houses.
In the same year, a new Groundsman's Lodge was built, and

Mr Cyril Marsh was employed as Head Groundsman. His role was to prepare the new site by erecting new gates, planting belts of trees and hedgerows, laying new roads and designing the new school playing fields. He remained in this role until his retirement in 1976. In 1982 his son, Billy Marsh, became Head Groundsman

1939 - Five air raid shelters were built on the bottom field at the back of the boarding houses, and are still there today. Four are used for storage and one remains as it was, and which is revisited once a year by the old scholars.

1950s - from charity status to fee paying
It was decided that the school would become a boarding and day preparatory school, with the start of fee paying system for a proportion of the school numbers.

2008 - A memorial garden was built, with a bench outside the school chapel, in honour of groundsmen, Cyril and Billy Marsh, for their services to the school.