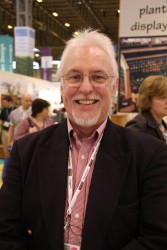 Members of the Turfgrass Growers Association (TGA) gathered at Thornhaugh near Peterborough for their annual members meeting on the 23rd November to address issues affecting turf production in the UK and Ireland.

The programme for the day was varied and began with an introduction to the work of the UK Irrigation Association by its CEO, Melvyn Kay. The association works with DEFRA, water companies and other bodies, representing the interests of those who irrigate as part of their business. East Anglia has had little rainfall this year, forcing the Environment Agency to grant a drought permit to Anglian Water just days after the meeting. Growers have relied on irrigation to maintain the high quality of their turf and Mr. Kay said that people associate drought with the summer months, but a winter drought is now a real possibility.

Members then heard from Karl Ferre from S-Tech Insurance who spoke about credit insurance ways that companies can manager credit risk.

Ellie Parry from Forte Marketing then reviewed the TGA's PR and marketing work over the course of the year before leadership trainer and motivational speaker Frank Newberry took to the floor to finish the morning session with an entertaining presentation on teambuilding, which involved full audience participation, the setting of a new world record, and the use of a magic stick!

The afternoon session was devoted to TGA matters with updates on the Turf Show and the association's annual survey, followed by an update from independent agronomist, Robert Laycock, on a recent meeting he and TGA Chairman Hugh Dampney had with British Standards.

TGA Chief Executive Tim Mudge said: "Once again this event has attracted growers and associated companies from all around the UK and proved that members value the work of the association. It also helps to have such good quality speakers on matters relating to turf and also to their businesses as a whole."

TGA members will reconvene in the spring at a venue to be confirmed.