We frequently advise local authorities, schools and clubs on the growing-in of newly constructed pitches. In many cases, the maintenance requirements are not understood or have not been specified to a high enough level. This article examines the problems commonly found and discusses a number of solutions. However, it is important to seek specific advice as each site will be different.

Invariably new pitches are fertilised at seeding and then left. This can result in weak grasses, poor density and a significant risk of developing weed species.

The soils on new pitches can sometimes be poorly structured and young grass can often tend to be surface rooted if the soils do not allow roots to develop fully. Until the roots fully establish from the adventitious to fibrous stage and to a suitable depth, the volume of soil from which nutrients are taken up is limited.

There is, therefore, often a need to increase the nutrients to a level that gives good growth, but not so excessively to generate organic matter or only stimulate surface rooting. The nutrient level will naturally differ from soil type to soil type but, typically, is around 90-180kg/ha nitrogen per annum, although more may be needed in very sandy free draining constructions. The aim is to promote good levels of growth without creating a soft, weak sward. Dark green may be too much! 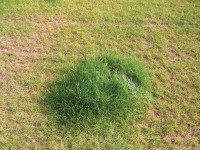 The effect of fertiliser is often seen where rabbit urine creates a flush of growth. Whilst such a localised level is probably much too high, its effect clearly demonstrates the need to slightly increase fertiliser needs.

The benefit of appropriate levels of fertiliser is to speed up establishment though good health and tillering. This will hopefully allow the sown grasses to out-compete annual meadow-grass, clover and other weed invasion. Of course, if there are any particularly weak or bare area, overseeding with the originally sown mixture should take place.

Sometimes newly turfed pitches can be very thatchy and so there is a need to undertake scarification. Too much thatch can result in the surface being slow and liable to divot badly.

Newly moved and replaced soils typically have little structure and this takes time to return. A combination of root exploration, worm activity and physical processes gradually create fissures and pore space. The net result is that drainage gradually improves as long as there is no significant compaction present. However, playing too soon and in wet conditions will often liquify the top 50mm of the soil profile and this can result in high wear and loss of grass cover. Ultimately, a pitch rich in annual meadow-grass often results. The solution to the above is to firstly allow sufficient time for a pitch to establish. This should be at least a year, but some light play can sometimes be allowed, particularly during the summer months when the soils are dry.

The next most important activity is aeration. I often recommend some form of aeration on a monthly basis. On heavily compacted sites, vertidraining could occur two to three times in the first year, with solid tining in the remaining months. Sometimes the use of a linear aerator can be of benefit, with or without sand injection. Care must be taken with this form of aeration - undertaking the operation at the right soil moisture content to prevent cracking. Use in some wet, heavy soils should be avoided. Slit tining could also be carried out.

Sand dressing, either locally or over a whole pitch, is particularly important on heavier soils. The sand (in combination with aeration) helps promote surface drainage if sufficient is applied. The sand type is critical - it must be a medium-fine sand with little or no fines and, ideally, sub-angular in shape.

Many drainage installations will settle as part of the maturing of the construction. It should be expected and could occur annually for several years dependent on soil type, the weather conditions, irrigation availablity, not to say anything about the standard of drainage installation. With clay soils prone to shrinkage, the process involved with settlement results from the drain line acting as a plane of weakness along which the clays crack.

This allows some aggregate to fall into the widened crack and, hence, there is settlement at the surface. The remedy is to top up the drains as settlement occurs with the same material as the backfill or the same sand as above. An item to topdress sunken drain lines in the first year should be included in the construction specification

When sand banding or sand slitting is installed there is an absolute requirement for sand dressing to be applied to help prevent the slit capping over in usage. I have seen systems capped over within a couple of years and become ineffective. The sand dressing helps to dilute any native soil and assists in retaining the integrity of the slit. Unfortunately, it is common to find a newly developed pitch with a significant stone content visible in the surface. This could come from the parent soil or careless use of drainage aggregate. Such stone is unacceptable in today's health and safety society (not to say anything about litigious aspects). It is a misheld belief that stone moves up in a profile. The normal occurrence is that fines wash off stone in the surface or the surface is eroded through play. In either event, the possibility of injury is high.

In heavier soils, stone can settle into the profile over time, particularly if the soils become waterlogged. The process is possibly similar to the effect of puddling concrete to bring liquid to the surface. However, this can take a few years.

The most common remedy is to cover the stone with either sand or topdressing. Ideally, a layer of around 40mm should be built up over time but this is costly and has distinct risks of erosion, particularly in goalmouths. Turfing with deep turf can help, as long as the soil can be matched.

Larger stone should be hand picked off as soon as germination occurs, and this includes any sharp materials. The development of a dense sward can create a good cushion but could be worn away to re-expose the problem. However, the specification of work should include items to prevent a stone problem, e.g soil screening or good working practices when introducing aggregate.

The height of cut should be carefully managed. Allowing the sward to grow to 100 mm and then cut to 25 mm, as sometimes happens, will weaken new grass and open up the sward to weed invasion. My preference is to allow growth to around 60mm and then cut to 45mm and then maintain no more than 15mm of growth between cuts. This encourages tillering and prevents significant stress.

There may be a need, initially, to carefully roll to smooth the surface for the first cut. Any significant level discrepancies should be addressed, although this may be covered by a defects item in the contract works.

Leaving masses of clippings on the surface should be avoided at all costs as this can easily smother new grass, leaving patches and organic debris. If this occurs then reseeding may be required, after harrowing or scarifying.

The majority of the problems mentioned above can be resolved through a good specification of works for the construction and an understanding of the need to intensively maintain a new pitch.

It is vitally important to consider the early maintenance cost in the overall project to ensure there is sufficient budget included for this item.