0 Growing in The Castle

The Castle Course was built to take the pressure off the already very busy courses on St Andrews Links. The Old, New, Eden, Jubilee and Strathtyrum courses each support over 40,000 rounds of golf per year. A dramatic cliff top location became available to the south east of the town. It was here the Links Trust chose to develop The Castle Course. It really was a location like no other in the world. David McLay Kidd from DMK Golf Design was commissioned to design the course and Paul Kimber was given the role of permanent on-site architect through course construction. DMK Design undertook the shaping, while subcontractors were commissioned for bulk earthworks, irrigation installation and drainage.

Greenkeepers from St Andrews Links Trust, led by Allan Patterson, completed the final preparations, finishing and seeding. The STRI was commissioned by the Links Trust as consultant agronomists for the project.

This unique set-up of having a project team, with no main contractor, meant there were no limitations on the finished design. The result has been something truly special. The design and layout has been described by Golf Course Architecture magazine as the single best example of shaping and one of the finest examples of modern golf construction in the UK.

This article describes how skilled greenkeeping turned the exciting design into reality. Our task was to create playing surfaces that brought the design to life.

The course is situated on heavy, poor draining soils, which meant the greens had to be constructed artificially following the USGA guidelines. After much laboratory testing, the final rootzone mix consisted of 90% Levenseat sand and 10% peat. This provided a good, but very free-draining, growing medium. Consequently, moisture management and fertility control were going to be crucial, especially with regard to the severely contoured nature of the finished putting surfaces.

Add to this the cliff top location of the site, the wind and the salt-laden air, the grow-in was always going to be a challenge. Thankfully, there was no rush. The Links Trust would only open the course when it was absolutely ready. The pressure was on to get the job done right, not in a hurry.

The rootzone mix was extended into the wide surrounds and approximately 30 metres into the green approach to ensure a firm and consistent surface was created. This allowed the running game to be played, which is an integral strategy of the course. As the soil type on the fairways was heavy in nature, a programme of intensive sand topdressing was required through the grow-in, with approximately 5,000 tonnes being applied to date over 15.5 hectares. This was required to provide firm, tight and crisp lies to allow the golfer optimum ball control when playing into the greens.

Fescue was sown throughout the course and an 80:20 mix of fescue and browntop bent was used on the greens. The seed was supplied by Barenbrug. The mix for the greens was 50% slender creeping red fescue (Barcrown and Barpearl), 30% Chewings fescue (Bargreen) and 20% browntop bent (BarKing). A dominance of fescue was required to optimise playing quality (in terms of smoothness, trueness, pace and interaction between ball and turf), minimise vulnerabilities from disease and extreme weather and, ultimately, provide putting surfaces that fitted in with the golfing strategy of the course. The objective for the whole course was to provide fescue dominated surfaces. 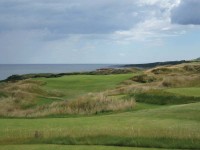 The establishment of the greens (and the course as a whole) was tackled on a hole-by-hole basis. The first holes (12, 13, 14, 16 and 17) were constructed through the summer of 2005 and seeded during August through to mid September that year. Initially, hydroseeding was used to distribute the seed but this, on the first attempt, did not prove too successful.

The strategy was changed to using a drop spreader then pressing the seed into the surface with dimpled tyres. This was followed by an application of a cotton/jute-based mulch to keep the seed in place. The change to the seeding strategy worked a treat.

Our main agronomic objective through the grow-in of the greens was to create a full and dense sward as quickly as possible to minimise the chances of annual meadow-grass invasion into gaps. Regular overseeding continued until a full cover of grass was obtained. Occasional non-aggressive brushing was used to refine texture.

Regular topdressing with the Levenseat LV20 sand was applied right through the establishment to smooth out the surface levels and dilute any organic matter at the turf base. Turf Iron rolling was carried out to keep the surfaces firm and avoid them becoming too puffy.

With such a sandy rootzone, appropriate fertiliser inputs were crucial to generate dense turf. Initially, all the greens received a pre-seeding fertiliser of 18:24:5 and then a couple of applications of an organic based nitrogen product to gently ease the seedlings through early establishment. Thereafter, and throughout the 18-24 month establishment period, ammonium sulphate and potassium sulphate were the main nutrients supplied. We wanted to use predominantely ammonium sulphate based products to create healthy growth and also to acidify the turf base to discourage annual meadow-grass seed germination. It worked beautifully as we had no annual meadow-grass invasion during the establishment phase. We still haven't.

The quantities of nitrogen were never really a consideration. We did not want to be constrained by numbers when feeding the greens. It was important to do what was necessary to establish a dense sward. Starvation would only hamper progress and result in thin turf for annual meadow-grass seeds to invade. It was important to avoid over feeding as this would have required aggressive surface preparations and accelerated organic matter accumulation. The greenkeepers skilfully trusted their judgement about progress with the density, vigour, clipping production and colour to dictate fertiliser frequencies. At the end of the first full season, approximately 200kg/ha of nitrogen had been applied.

As the greens became a year old, superficial fairy rings occurred with some severity. A programme of intensive wetting agent treatment combined with appropriate inputs of fungicide (azoxystrobin), HydroJecting and careful irrigation management has been employed to keep the symptoms at bay. It is hoped this programme will gradually reduce the problem over the next few years. During the summer of 2007 some dollar spot developed on some of the greens. Like all east coast links courses dominated by fescue, this is becoming an increasing problem that will have to be carefully monitored to avoid undue damage to the turf.

By the autumn of 2007 the greens were all mature, with play planned for June 2008. Through the spring of 2008, the greens developed beautifully due to expert greenkeeping and sound agronomic principles. Regular topdressing, hand mowing, rolling and brushing were sufficient to prepare smooth and true surfaces. Our general strategy was (and will continue to be) creating the right environment to favour the finer grasses. This means keeping damaging treatments to a minimum.

In terms of fertiliser, ammonium sulphate was used through the spring in granular feeds and then liquid formulations through the late spring to early summer. This supplied sufficient nutrient to maintain the development of a dense and healthy sward. Primo-MAXX was also used to retain density and minimise the need for aggressive treatments. Again, retaining turf density and avoiding the presence of gaps in the turf was the underlying greenkeeping strategy.

We continue to monitor the level of organic matter accumulation to optimise firmness, ball-to-turf interaction and moisture control. Loss on ignition tests are carried out twice a year to determine the precise level of organic matter through the upper soil profile. In spring this year, the readings were around 5.0% in the top 20mm, which is just right. Regular topdressing, along with appropriate nutritional and irrigation inputs, is being used to maintain these desirable levels. A top priority is to avoid the need for aggressive thatch removal operations such as hollow coring or scarification to minimise the production of gaps and thus opportunities for annual meadow-grass invasion.

As the course opened for play, Allan and his team started to receive the positive feedback they deserved. The greens and turf areas were simply top class. It was the model grow-in; a real shining example. This is how it worked:


The result has been delight all round! Our pride and the golfers' joy.

Once the course opened for play, some adjustments to maintenance were required as Allan and the team had to move from a programme of turf establishment to one of daily maintenance.

It soon became apparent that controlling the green speed would be the most important issue. Due to the contouring of the greens and the exposure of the site, green speeds of over nine feet on the Stimpmeter would be too quick on breezy days. Therefore, careful regulation of surface preparations in response to weather conditions was required. Invariably, there is a need to ease back on the refinements, which is a bonus. 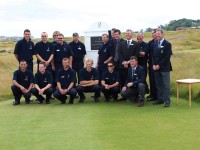 It was also found that liquid ammonium sulphate based feeds (which were successful through the spring to early summer) were insufficient to retain density under play, so a granular feed containing ammonium sulphate and methylene urea (Sierraform GT 16:0:16) was applied in mid-July to good effect. Topdressing has been applied between the golf, using a spinning disc topdresser. Regular hand watering, HydroJecting and wetting agent applications have been continued to combat fairy ring development.

The autumn programme tested organic matter content in the laboratory to determine the level of dilution required. It is hoped that regular topdressing and careful fertiliser application through the summer will have avoided any drastic accumulation.

Fescue overseeding was very important to fill in any gaps arising from play and to restore a strong and full cover. This was done three times using a dimple seeder. You cannot overseed too much on new establishments. It is essential to close down the gaps to avoid meadow-grass invasion. To provide rest, avoid damage and retain turf density, the course was closed from 1 November 2008 and will not reopen until 31 March 2009. Protection of new greens through their first few winters is paramount.

So, that's the story of The Castle Course grow-in. It is a story of first class greenkeeping from Allan and his team. It was a challenge to meet the standards laid down in the breathtaking design, but we think that the surfaces do the course proud. Go and see for yourself, it is a treat for any lover of real golf. The Home of Golf remains a fine turf heaven.

Richard is the agronomist for STRI's South Scotland region, working from a Glasgow base. He provides agronomic support at a wide range of sporting venues: golf courses, bowling greens, sports pitches and cricket grounds. Richard is STRI's Agronomist to the home of Scottish Rugby Union, Murrayfield.