by Karl Danneberger
in Consultancy
on 16 Jul 2008 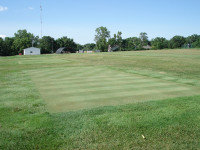 In the last 30 years, plant growth regulator (PGR) use has progressed from a marginal or niche application to an integral part of golf course management programmes. In the early 1980s mefluidide (Embark®) was the first plant growth regulator widely used on fine quality turf. Mefluidide was, and still is, primarily used on Poa annua or Poa annua containing fairways for seedhead control in the cool temperate regions. An application timed properly prior to seedhead emergence could provide over 90% seedhead control. It suppresses growth and seedhead formation through inhibition of cell division (mitosis) in the meristematic region of the plant. Due to its mode of action, mefluidide was characterised as a Type I compound. Picture Left (fig 1)

In the mid 1980s two additional PGRs - flurprimidol (Cutless®) and paclobutrazol (Trimmit®) - became available. These were different from mefluidide in their mode of action (Table 2). The newer PGRs, including flurprimidol, paclobutrazol, trinexapac-ethyl and ethephon (an older chemistry but relatively new to turf), work to inhibit or enhance plant hormones (Table 1). 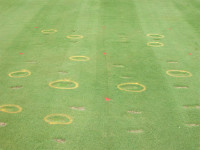 In the temperate region of the United States we found from surveying 90 golf course superintendents, 84% of the respondents used PGRs for greens management. In the United Kingdom a 4-week application interval is recommended (as with any chemical compound always follow the label directions). In our survey we found weekly (7-day) or biweekly (14-day) applications of PGRs at reduced rates for greens management accounted for 85% of the applications. Given the frequent applications of trinexapac-ethyl on golf greens, we wanted to look at the continual use of trinexapac-ethyl on divot and aerification (coring) hole recovery. Picture right (fig 2)

Three days after application six divots were made by hitting golf balls in each plot. Divot size, as measured by the length and width, was recorded weekly. Regarding divot recovery as measured by the size of the divot over time, we did not find any significant difference between trinexapac-ethyl treated plots and the untreated. Given these results, the inference may be made that divot recovery on creeping bentgrass maintained at putting green height would not be impacted either positively or negatively by trinexapac-ethyl treatments.

Aerification (Coring) Hole Recovery: In a series of studies looking at both trinexapac-ethyl and paclobutrazol we found no difference in core hole recovery with trinexapac-ethyl applied at 4ml per 100m2 on a 7-day schedule, nor with paclobutrazol applied at 0.14kg per ha and 0.07 kg per ha1 on a 14 day schedule. As a note of caution both studies were conducted from late summer through early fall. 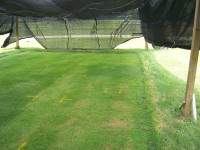 Physiological impacts: Applications of trinexapac-ethyl have also shown that there is a positive impact on colour of turfgrass canopies, and this has occurred across many studies. The dark greening of the grass surface that occurs from repeated applications has found favour with players and golfers alike. The other major angle of research in the use of growth regulators is improving tolerance of shaded turfgrasses. Picture left (fig 3)

Turfgrass in shaded conditions elongates and loses density which leads to loss of wear tolerance. It is a problem for stadium and golf course managers alike. There are some succinct differences though; neutrally shaded sites such as stadiums have loss of light intensity compared to golf courses shaded by mature tree lines which impact light quality. The change in the light has different impacts on plants both considered negative. The loss of light quantity however is of major concern and it has been shown that repeated applications of trinexapac-ethyl have delayed the loss of turfgrass cover in shaded conditions. This has been successful in as high as 80% reduced light on certain species.

Research Implications: From our studies it appears that repeated use of trinexapac-ethyl has no detrimental affects on turfgrass recovery from divoting or coring. The use of the growth regulator has also proved beneficial in managing turf in shaded conditions and it is a tool that is open to all turfgrass managers both in the United States and the United Kingdom.

Table 1: Plant hormones and their function (3).

Figure 1 (main picture). The majority of plant growth regulator studies have been conducted on USGA constructed greens established to 'Penncross' creeping bentgrass located at the Ohio Turfgrass Foundation Research and Educational Facility, Columbus, Ohio. The greens were mowed at a height of 3.1 mm.

Figure 3 (below). Shade cloth was used to enclose creeping bentgrass turf to look at the impact of neutral shade on turfgrass growth with plant growth regulators.