by Neville Johnson
in Equestrian
on 07 Jun 2013

0 Guards Polo - a park pitch fit for a Queen 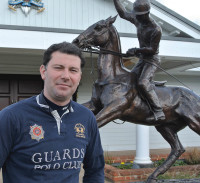 Windsor Great Park is a Royal Park, and the only one that's actually managed by the Crown Estate, HM The Queen's property portfolio. Even on a March day that is more like winter than early spring, there are plenty of visitors enjoying this vast unspoiled outdoor amenity. More than two and half million go there each year to walk, run or ride through its wooded avenues.

This year, the sap of its fauna was definitely slow to rise. Not so at the Park's sporting gem, Smith's Lawn, home of Guards Polo Club where the 2013 season was fast approaching.

Wentworth, Sunningdale and Ascot are all big name neighbours, but none of them are open to the public like Smith's Lawn is. Yet, it is a revered venue and known the world over as a polo club par excellence.

The club was founded in 1955 with HRH Prince Philip, himself an accomplished player, its President. Fifty-eight years on, keen as ever, he remains President, attending many matches. It was originally called the Household Brigade Polo Club, but changed to its present title in 1969. Today, there are about 160 playing members and 1,000 non-playing members. Why Smith's Lawn? Apparently, Smith was the name of a Park gamekeeper back in the 17th century.

Peter Svoboda has been at the club eight years and he's now in his third season as its Grounds Manager. Peter's not a horse person, still less a polo player. His sporting background is actually football. In his native Slovakia he signed as a professional at eighteen for the club now known as AS Trencin who play in the country's top league.

He tells me the club has 130 acres of grounds. As I look out of the window of the clubhouse, it stretches as far as I can see. There are ten pitches in all, though not all of them full size or, for what is called high goal polo, the highest standard.

Ground One, right in front of us as we talk, and Ground Two are where all the main finals are played, and they are 300 yards long and 160 yards wide. Put into perspective, that's enough turf for twelve football pitches. These are the required dimensions for top-level polo and they represent the largest playing area for any organised sport.

Something like 370 matches a season are played on the club's pitches, so Peter has his work cut out keeping them playable, the more so because, being an integral part of Great Windsor Park, they are open to the public pretty much all of the time.

Park visitors are free to walk across its pitches - even with dogs - except on match days. It's not ideal for turf care, but Peter says he gets used to it. Most people cause no problem whatsoever. A bit of stick collecting - and the occasional black plastic bag with scooped contents - are minor chores. There are signs asking people to keep dogs under control and not to use the pitch areas when play is in progress, but it is a very definitely a public amenity. In its way, it is no different to park football, though the upkeep and repair issues differ vastly.

Peter has eight groundstaff working for him, six of them full time and two for the April to September playing season.

One of their biggest regular jobs is installing and dismantling ground boards, which are 30cm high and 3.6 metres long, before and after matches, so that the whole area is quickly returned to park appearance. These boards mark the outer boundary of a pitch and keep the white, hard, plastic balls, similar in appearance and size to those used in cricket's one-day game, within the playing area. The boards, together with fencing, installed pre-season and dismantled at the end that mark the perimeter of the club's grounds, are stacked on pallets when not in use out of season.

Pretty well all necessary machinery belongs to the club. Only fertiliser and weed control spraying is conducted by outside sources. Peter has everything on site he needs for aeration, sand spreading, irrigation and, of course, mowing.

Cutting is a year round job, and it's a big one. Just trimming one of the main pitches takes getting on for two hours. A trailed 6-metre wide Trimax Pegasus S3 rotary machine is his tried and tested workhorse for this. Over winter cutting heights are generally 34-35mm. During the playing season, it is down to 21mm and maybe 19-20mm on Grounds One and Two. These are the recognised and preferred heights in the sport. A sweeper-collector tidies up the cuttings. A Toro 7-gang cylinder mower is used to trim Grounds One and Two to give them the finished look on match days. Cuts are from goal to goal, zero degrees and 90 degrees, so that the line of play is emphasised.

Soil conditions are sandy, though topsoil depths do vary, and the grounds are generally well-drained. Peter uses the services of agronomist Steve Gingell to advise on appropriate fertiliser and herbicide programmes. The main annual spray application by a local contractor gets done each April just prior to the new season. Steve makes regular visits to Smith's Lawn, before and after the season and three times during playing months to give Peter advice, in particular on the amount of added magnesium required. Steve will also carry out periodic soil testing.

The club's pitch turf is 100 percent ryegrass. Peter says he'd like to switch to stronger smooth-stalked varieties for Grounds One and Two but, at the moment, fixture commitment means it is an impractical project. It would mean closing the two show pitches in August for 'burning' and scarifying before re-seeding, but it's something for the future.

Horses are not great respecters of turf and Peter has forty tonnes of divot mix - 70:30 ryegrass seed and sand/soil - always to hand during the playing season for running repairs.

Divot replacement is a massive job, of course, mostly labour intensive and, just like course managers in horseracing, Peter hires a gang of ten workers specifically to handle it. He also has a custom-built roller for the task. Unlike horseracing though, the divots do not all go in the same direction, so it's much more painstaking work. There is a tradition in polo that, in match breaks, spectators go on to the pitch to help put the divots back. It's called 'divot stomping' and is as much a means of socialising as pitch care, but Peter certainly welcomes this unofficial help.

Overwhelmingly, Peter says, the main pitch upkeep requirement is safety, both for the riders and the horses. Nothing overrides this. He has to provide a surface with what he calls 'trust and comfort' factors. It is a sport with inherent dangers anyway. It is the groundsman's job to see these are kept to the absolute minimum. Also, polo is no different to other ball games on grass, in that another essential is to see that ball movement over the surface is as consistent as possible - divots notwithstanding!

Verti-draining is the key to producing safe and consistent Polo turf, says Peter. In the past, compaction relief hadn't perhaps been done enough. The rooting profile here is naturally shallow and a 500 kilo horse is always going to disrupt it extensively.

"We need to do what we can to get deeper rooting and, by using the Verti-drain all year round, we are getting a deeper profile and less damaging divoting," says Peter.

The tine depth he uses varies, but ahead of first play on Grounds 4, 5, 6 and 8, for instance, he spreads sand and then verti-drains with shorter 15cm tines, 12mm wide. This job alone takes about three weeks. Peter says the club has always had a Verti-drain, but in the past it was used only over winter. He is getting better results now it is playing a year round role.

For pitch marking, Peter uses a laser linemarker. It too is a major task, taking one of the team from 8.00am until 2.00pm each day during the playing season and, because some of the pitches, other than Grounds One and Two, interject each other, some used lines have to be painted green for each fresh match. 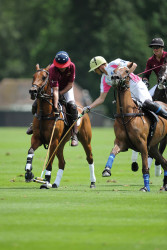 There is one particularly match day responsibility not shared by Peter's counterparts in other sports. He is in charge of the horse ambulance and is alerted into action by radio if removal of an injured horse to the on-site vet box is ever necessary. Fortunately, this is not very often.

Peter says he doesn't have close contact with players, so feedback regarding how the pitches are playing comes to him via regular Grounds Committee meetings, which he attends. Neil Hobday, the Club's Chief Executive heads up this committee, which includes other club officials and some respected senior players.

The rules are actually quite straightforward, with safety at the core. In a very small nutshell, here are the fundamentals:

Two teams of four try to hit the ball between goalposts eight yards apart to score. Each time there is a goal, teams change ends, so field and wind conditions are fairly shared. Matches last up to an hour and a half, divided into 7-minute periods of play called chukkas. Players have to mount a fresh horse after each chukka. There are two mounted umpires and an on-looking referee to see fair play. More difficult to understand, if you're not a polo watcher, is that there is a right-

of-way governed by the line of the ball. Even harder - especially if you're left-handed - is that players may only hold a stick in the right hand. The Hurlingham Polo Association is the governing body for the sport in this country.

Equally difficult to grasp outside of the sport is the handicapping of players. In its way, this is much like golf, being based on past performance. It is designed to see that teams are equally weighted in ability and matches staged at differing standards. High goal, as mentioned is polo's crème de la crème. Medium, intermediate and low speak for themselves.

Polo used to be an Olympic sport before the Second World War and is, once again, recognised by the IOC. Excitement, spectacle and appeal are surely enough to get it re-instated?

Peter tells me that high goal polo is amazingly exciting and the skill of the riders leaves him awestruck. At any level though, they and their horses don't do his pitches any favours, and it's an around the calendar and, between April and September, an around the clock job to keep Smith's Lawn looking and playing as good as it is. The first big test comes on 21st May when this year's annual Queens Cup tournament gets under way, culminating in the final on 16th June. Historically, HM The Queen attends this event and, no doubt, Ground One will be fit to lay before her.