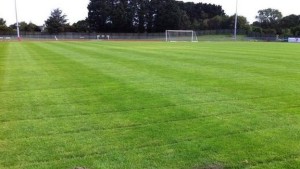 "We've done a lot of major work to it," he told BBC Guernsey.

"I'm quite pleased with it - it's improving every week and hopefully it should be fine."
Continue reading the main story "I've had a few sleepless night but luckily I love what I do" Guernsey FC groundsman Shane Moon

Guernsey FC - who have their first home game of the new season against Horsham on Wednesday - were forced to play 20 matches in the final 36 days of the 2012-13 season because of a combination of postponements and their run to the semi-finals of the FA Vase.

They had to play four games in as many days at the end of the season, but still managed to seal second place to book their promotion to Ryman League South. 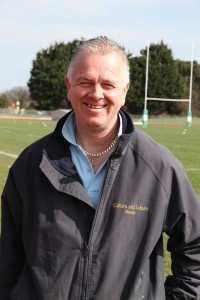 Moon said the club has worked hard to improve the drainage with the introduction of a gravel band system. The work involved cutting around 100 trenches in the pitch and filling them with gravel and sand to aid drainage.

"We've dug down to 400mm, gravel banded it to 300mm and then top dressed with sand on top of that and seeded the whole pitch," he explained.

"I've put my head on the block and said we shouldn't have a problem with standing water.

see the rest of the articlde on the following link:-BBC News