During the German occupation of the island in the Second World War the unwelcome visitors commandeered the clubhouse; turf was stripped from greens, tees and fairways to provide camouflage for their gun sites.

A newly designed course, by Scottish architect Mackenzie Ross, came into play in 1949. Subsequent alterations to this design were carried out by Fred Hawtree, twenty years later, to form the marvellous links that is played today.

GCM employ seven full time staff and one part time staff member. Marcus Hamon is the Head Greenkeeper and has been at the course for twenty years, achieving his NVQ level II and III qualifications under the guidance of Peter Jones of PJA.

Marcus was nominated for the Toro student greenkeeper of the year in June 2003, just missing out on the final twelve. In February 2004 he was nominated for a City and Guilds medal for excellence and received this in July 2004 from HRH

Prince Philip at Buckingham Palace. Marcus is now a qualified NVQ assessor and has three members of staff who have achieved NVQ level II under his training and supervision.

Aeration is the key at L'Ancresse to keeping the greens in excellent condition. Marcus has not had any temporary greens in play in the twenty years he has been at the golf course.

They are vertidrained with ½" solid tines and full heave to a depth of between 6" and 9", depending on ground and weather conditions, in November and February.

The greens are pencil tined (8mm solid) once a month during the playing season (March to September) to a depth of between 4" and 6" with no heave.

Topdressing is carried out once a month in the playing season at about 500kg per green, and Marcus likes to do this after verticutting to get the dressing worked in to the base of the plant. They are not normally cut the day after dressing, only getting a vibrating roll.

They are fed with Scotts Double K (7:0:14) as a base feed, normally at the beginning of March when the weather starts to warm up, and again towards the end of April at a rate of 30gm2. They are then fed with liquids, every four to five weeks, with Headland Trisert KS at a rate of 60lts/ha mixed with Proturf at a rate of 20lts/ha and Scotts PrimoMaxx at a rate of 400ml/ha.

Headlands Tricure AD is applied after pencil tining at a rate of 10lts/ha and mixed with Turf Complex at a rate of 20lts/ha, once a month, between Trisert applications.

The greens are predominantly Poa annua with a small percentage of Rye, Yorshire Fog, Bent and Fescue - a programme is in place to increase the Bent grasses first before trying to increase the Fescues.

Marcus tries to keep the speeds up at about 9 on the stimp meter during the summer, which is plenty quick enough for the playing membership. Any quicker, with the slopes that they have at L'Ancresse, and the wind would make them unplayable, However, on rare occasions for County championships, they may be pushed up to 10, but Marcus needs to watch the weather carefully.

Tees are verti-drained with 3/4" solid tines in November and February to a depth of between 6" and 9" with full heave, and again in April with ½" solids to a depth of 6". Those that are used through the winter are hollow cored with 3/8" tines to a depth of 3" (no heave) with the cores recycled back in to keep the cost of topdressing down. They are scarified and overseeded at the same time, using Advanta MM12 mix.

Fertiliser used on the tees is Sierrablen 28:5:5 applied in April at a rate of 40gm2.

Without doubt, the weather is the driving factor on the island, with the combination of wind speeds and warm temperatures dictating the condition of the course. In the winter, when there are high tides, some parts of the course get flooded, with areas on the fairways dying back due to the salt contamination.
Once the floodwater has abated, the contaminated areas are reseeded and fed to promote new growth.

The course is unique in many ways. Not only having to provide two sets of members with a challenging course, Marcus and his staff are constantly battling with the elements and limited resources to keep the course in tip top condition. The sheer cost and logistical implications of importing products, goods and services is challenging, and is often dependant on availability.

Also, every year, the course is closed for the island's annual horseracing meeting! 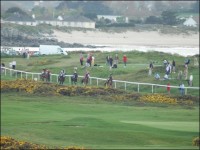 A record entry of 28 horses, including a first from France, contributed to a fine day of racing at this year's annual May Bank Holiday race meeting at L'Ancresse, culminating in the biggest field for one race since the sport was resurrected five years ago.

Jim Jamumeanu, President of the Racing Trust, was very happy with this year's event, especially as 3,500 plus racegoers turned up for the event. Jim has a long association with racing on the island, having been an active member of the trust for many years, and also trained a number of horses for the race.

The event is unique in that it runs across common land and the L'Ancresse golf course. The track is set over one mile 760 yards, providing an interesting circuit for the horse and rider.

Upgrades were carried out this year to improve the finishing straight, with an army of volunteers helping to remove tracts of gorse to reline the track. Also, some localised flooding prevented the sward from maturing, so parts of the track had to be re-turfed. 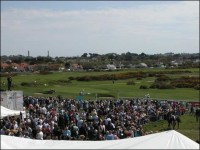 It takes two weeks to prepare the course, setting up the running rails and appropriate safety fences, and one weekend to set up the tented village that provides essential facilities - accommodation, stores, offices, toilets, entertainment and stables.

Horses and trainers arrive two days before the meeting to acclimatise themselves with the course. This year was quite dry, with parts of the course having to be watered on a daily basis to maintain the going at good to firm. The race meeting starts at 2.30 pm and finishes at 5.00pm.

It is a popular event with the islanders and, with an entrance fee of just £6.00, is very good value. The Trust is now considering whether it would be more cost effective and attractive to provide two days of racing. So far, there has been good feedback from trainers, riders and the general public for this to happen.