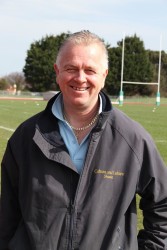 I was invited to visit Guernsey by Shane Moon, Head Groundsman at the island's Footes Lane Stadium, one of the sites run by the States Of Guernsey Culture and Leisure Department, who are responsible for promoting and maintaining a range of sporting services.

Shane has been with the States of Guernsey Leisure and Culture Department for twenty-six years, and has worked at most of the sports facilities on the island during his time with the department.

He has spent the last seven years at Footes Lane. The 13-acre site was redeveloped in 1992 at a cost of £1.2 million to provide a much improved stadium pitch, a Polyflex all weather floodlit athletics track and a full size artificial turf pitch, which has recently had a purpose-built hockey pavilion added.

A major development of the Garenne Stand, seating 720 spectators, has transformed the complex into a showpiece venue for sporting events on the island.
Guernsey Rugby Club have two rugby pitches adjacent to the site, but rent the stadium pitch for all their first team fixtures and when hosting overseas touring parties. Shane has to manage an ever-growing list of fixture and events.

In the course of a year, footfall can reach 150,000, much of it from local schools and football clubs who use the pitch for matches and training camps.

During my visit, Southampton Football Club were holding a week long football camp, which involved children of all ages being coached by the club's staff coaches.

Every year, Shane organises the renovation of the stadium pitch, usually going through a process of scarification, aeration using a vertidrain, applying 90 tonnes of imported sand from mainland UK and overseeding with Advanta MM50, a perennial rye grass seed mixture. A relative straightforward job you might think, but it usually comes at a cost!

In the UK, sand is usually delivered to site at around £25-30 per tonne. On Guernsey, Shane has to pay around £125 per tonne due to the cost of transporting materials and machinery to the island. The total cost for topdressing just one pitch is a staggering £12,000!

Sand and topdressings can only be sourced from mainland UK, hence the cost. In fact, all grounds maintenance machinery and amenity supplies, such as seed and fertlisers, have to be imported from the mainland.

All of these supplies come through local dealer, Stan Brouard Ltd, who have been in operation since 1950. Originally agricultural and horticultural suppliers, the company has had to divesrsify into amenity products as the other two sectors have declined.

Once the football and rugby seasons are over, the stadium pitch is marked out for athletics field events. During the summer Shane spends much of his time at the stadium, mowing 2-3 times a week. This is the peak time for usage.

The States of Guernsey recoup some of the costs of the facility by charging up to £360 a day to hire the stadium.

Shane also oversees the work on two bowling greens. The sward is maintained at a winter height of 10-12mm and, between April and September, they are cut every other day at 5mm.

One of the greens has a unique characteristic - it has Cotula (Cotula squalida) growing in the sward. This southern hemisphere evergreen plant is used as a grass substitute, often on bowling greens, in New Zealand. Many years ago, the Cotula was introduced onto the green, by a previous greenkeeper, and has now become quite established. Shane did try to eradicate it a couple of years ago, by spraying the whole green with glysophate and heavily deep scarifying the base of the plant in the hope of killing it. However, it managed to re-establish itself and is now back with a vengeance.

The cost of digging up the whole green and relaying a new one is prohibitive, so it looks like a case of having to live with it. In New Zealand, Cotula is used extensively for playing bowls on when cut below 2mm, so Shane is considering changing his maintenance regime to favour the Cotula and let it become the dominant playing surface. Guernsey could end up with one of the only Cotula bowling greens in the northern hemisphere.

Disease, worms and moss problems are treated with appropriate chemical products such as lawn sands, moss killers and fungicide treatments when required, Shane likes to adopt a more cultural method of control by carrying out effective regular maintenance operations such as brushing, aeration and scarifying to keep the sward open and free draining. Feeding is kept to a minimum to promote the finer grasses he sows each year.

There are few pests on the island - no moles. foxes or badgers - just rabbits, that tend to be a problem everywhere!

The States of Guernsey are also responsible for maintaining all the school playing fields (sixteen junior and six secondary), road verges, parks and open spaces.

These are overseen by Contracts Manager, Peter Jackson, who has a large team of groundsmen and gardeners in his charge. Peter also undertakes contracts work for the various sports clubs on the island.

Beau Sejour Leisure Centre, which was successfully revamped between 2001-03, now offers facilities and services of the highest quality for sports and leisure pursuits.

The Centre's Manager, Martyn Boourgaize, is responsible for promoting and delivering a wide range of activities and events on a daily basis and has a dedicated team of staff who have helped the centre gain a much deserved 'Highly Commended' accreditation by Quest (see right). This puts the centre into the upper echelons of leisure centres in the UK.

The Northern Athletic FC pitch is tended by Jose Alvarez, one of the island's football and tennis coaches, who undertakes work on the ground in his spare time. Jose helps to mow and mark out the pitch every week, spending up to twenty hours a week at the club. He is assisted by Gary Cortez, the club's fixture secretary, who also has committed many years to the cause of looking after football facilities on the island.

The States of Guernsey provide a vertidrain and seeder for end of season renovation.

Quest is the UK Quality Scheme for Sport and Leisure.

Quest is a tool for continuous improvement, designed primarily for the management of leisure facilities and leisure development. Quest defines industry standards and good practice and encourages their ongoing development and delivery within a customer focused management framework.
There are two models to use for your team:

1.The Facility Management (FM) model is aimed at the management of any facility which provides an activity for customers; public, private, trust and voluntary sector.

2.The Sports Development (SD) model is aimed at the management of any team which provides or facilitates participation in an activity; public, private, trust and voluntary sectors.

Although initially designed for the sports and leisure industry, the good practice is flexible enough to relate to all cultural activities.

Each of the areas identified above has both a self-assessment improvement programme, and the opportunity for an independent external assessment.

To kick start the assessment process you will need to purchase a Quest Pack. This purchase includes subscription to the members only area of the website where you can access all the best practice guidance documents as well as benchmarking data and case studies.