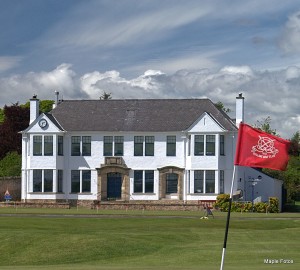 Gullane Golf Club, which has a history stretching back over 130 years, completed the development in time for the 2015 Aberdeen Asset Management Scottish Open which the club will host this month.

With the likes of Rory Mcllroy, Phil Mickleson and Justin Rose battling it out over the famous links, the new-look clubhouse will play host to the European Tour. But as the Secretary of Gullane Golf Club explained, the wide-ranging changes may not be immediately apparent to the thousands of spectators expected at the famous Scottish club.

"The Members' Clubhouse has been a landmark on Gullane's skyline for nearly 100 years so it was imperative that any changes would not affect the look of the town," said David Morgan. "Instead we wanted to retain the exterior of the clubhouse while revitalising the interior to accommodate a busy, modern club with all of its demands. I am pleased to say this was achieved."

The 18-month project saw Gullane's iconic clubhouse close to both members and the public while the extensive restoration work took place. To accommodate its members during this construction phase, the club built temporary accommodation next to its Visitors' Clubhouse which will be retained until after the Scottish Open.

"With three 18-hole courses as well as our children's course, Gullane attracts a lot of visitors so it was important to continue the service levels during the restoration period," said David Morgan. "The temporary facilities were received well by the members while the reaction to the new-look clubhouse has been amazing. We are very pleased with how it has worked out."

The technical task of upgrading Gullane's clubhouse while retaining the essence and classical frontage, went to award-winning Edinburgh design firm Susan Stephen Architects. The completely redesigned first floor, which incorporates the main dining facilities maximizes the views across Gullane's famous links courses. The plans allowed for a new contemporary glazed golfer's entrance to the rear of the building with a welcoming bag drop lobby, drying room and trolley charging store.

The rear extension not only provides both men's and women's locker rooms with direct access to the new entrance lobby, but importantly sits quietly hidden from public view. "Gullane is a conservation area, so retaining the façade and elevation of the clubhouse was essential," explains managing director Susan Stephen. "It is a dominant building in the landscape and visible as you drive into the village. It is an important landmark that we wanted to reinforce."

She continued: "We tried to give the members everything they had before but enhance their experience".

The clubhouse now incorporates flexible, interlinked social spaces while retaining the character of the original layout. It is, as Gullane's Captain puts it, a timely improvement to the club. "We are extremely pleased with the results," said Robert Dick. "It represents a considerable investment but clearly illustrates our continued commitment to providing our members and visitors with a world-class experience. Although we have only just moved back in, the response has been extremely encouraging".

In addition to the new clubhouse, Gullane has also created a new Championship Course for the Scottish Open which will incorporate 16 holes from Gullane's renowned No. 1 Course and two holes from its striking No. 2 Course. Three of the holes will feature newly built tees creating a modern test across a traditional links setting.