0 Half a century of Success 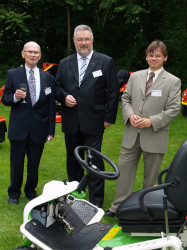 Etesia has joined its parent company, Outils Wolf in marking 50 years as a leading European manufacturer of outdoor power equipment.

To celebrate the occasion, Outils Wolf staged a highly prestigious two-day event at their Wissembourg headquarters. Day one was attended by dignitaries from notable French governing bodies; representatives from world-wide manufacturers and business partners; plus trade press and TV journalists from across Europe. Company board members and key personnel welcomed guests to a formal reception, at which Elmar Wolf, Chairman of the holding company made a resume of the 50 years history ,

Commenting on his aspirations for the future, Pierre Wolf, the President of the holding company and of Outils Wolf, said "As a 4th generation member of the Wolf family, my objective is to care for this planet as custodian for future generations. In conjunction with this, my aim is to continue our successful policy of producing innovative products which meet the demands of niche markets." Reinforcing this message, he unveiled plans and a site-model for a new 1million-Euro extension-project for the company's already highly advanced Research & Development facility.

Guests were then given a guided tour of the Outils Wolf factory, which since 1958 has produced over 3 million rotary mowers. In addition they viewed production and stringent quality control in Etesia's separate purpose-built manufacturing plant, which outputs in excess of 10,000 ride-on rotaries a year. Innovative product development and technical advancement that meets stringent EC legislation requirements are fundamental to both the Etesia and Wolf brands. The Research and Development Department site was of key interest to visitors who saw how computer aided design; product development and prototype endurance tests are at the heart of this state-of-the art centre.

On day-two of the celebrations, the Outils Wolf and Etesia factories staged an open day attended by locals plus all members of the companies' 450-strong world-wide workforce and their families, who in the evening were entertained French-fashion with a Moulin-Rouge-style cabaret and dinner.

Etesia UK's Managing Director, Patrick Vives said, "Elmar Wolf had great vision when he set up Etesia in 1989. It is the synergy of the two companies targeting different markets which plays such an important part in both our successes."