by External source
in Industry News
on 21 Nov 2012 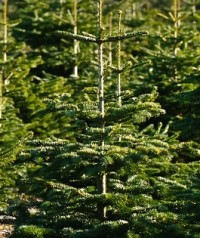 Britain's Christmas trees are under attack from an aggressively spreading disease that is sweeping through farms and hitting up to 50 per cent of their crops.

The condition, called 'current season needle necrosis', is killing the Nordmann fir and making hundreds of thousands of the UK's most popular Christmas tree completely unsaleable.

This disease attacks in the build-up to the festive period, turning its needles yellow and then later brown before they just drop off completely.

On many farms up to £50,000 worth of Nordmann firs from each field are being cut down and slung on the scrap heap. This species is found in 80 percent of UK homes on December 25.

Although shoppers will not be deprived of their real tree at home this Christmas, first made popular by Queen Victoria and Prince Albert in the 19th century, behind the scenes growers are losing huge sums and fear for the future.

It comes as many as 80million British ash trees are under attack from a different fungal disease that causes black spots, cankers on bark and twigs and branches dying.

'This is a big problem in Europe and the UK,' Berkshire Christmas tree grower Sadie Lynes told BBC Radio 4.

'Nobody understands totally why this is happening but it is something to do with a fungus.

'It has caused devastation in some crops and there are some that have nothing of them left.'

Experts are still baffled by why current season needle necrosis is becoming so virulent, with Britain's record warm and wet summers and also the use of herbicides which may be stripping off protective wax on fir needles being blamed.

A fungus, Sydowia polyspora, could be at its heart, but it is not known what causes it and how it can be prevented.

As recently as 2010 it was rare but now it is damaging hundreds of thousands of trees across Britain, with farms in the south of England worst hit.

Colin Palmer, who advises the British Christmas Tree Growers Association on this puzzling condition, said: 'It has never been a big problem and it has always been there but in the last couple of years it has gone from being benign and in one or two trees to aggressive. We are researching what is causing it.'

Article sourced from Mail on line