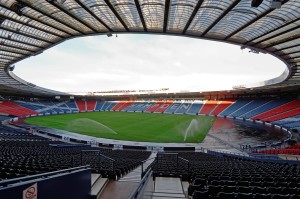 Hampden Park, one of Scotland's premier football venues, has reported an increase in flexibility, both in terms of pitch maintenance and water usage, following the installation of Toro irrigation.

Kicking off 2015 with the construction of a new pitch and undersoil heating, the Glasgow-based national stadium complemented the upgrades with Toro's advanced remotely controlled irrigation.

"I wanted more flexibility than the previous irrigation system could deliver, so specified the latest Lynx controller," explains head groundsman Stephen Bache. "Integrated with TurfGuard sensors that monitor temperature, moisture content and salinity in the playing surface, I have the tools to master the management and maintenance of the playing surface."

Water percolation through sand construction pitches, such as the one newly laid at Hampden Park, can be swift, cautions Stephen. "You have to keep a constant eye on them," he says. When he switches on the undersoil heating, the TurfGuard sensors will help him retain optimum conditions for the surface and rootzone.

Despite above-average rainfall in the area, Stephen strives to reduce his mains water bill; a task the new controller can also assist with. "The beauty of Lynx is that it can give me as much data and graphical information as I'd ever need," he says. "I can go as deep into the data as I want to fine tune it for our requirements, including knowing how much water the sprinklers have applied to the pitch, down to the last litre. It was difficult to tell before - just guesswork." 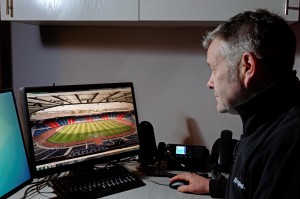 The irrigation process can be controlled remotely from Stephen's hand-held device or directly from a PC, mobile or tablet. With domestic, cup and international football fixtures kicking off now, the system is coming into its stride.

"I usually have a dialogue with the opposing managers about watering the pitch - some want it, others don't," explains Stephen. "The ball's supposed to move faster off the surface after irrigation."

Swift actuation is vital at half-time as a UEFA directive dictates that only five minutes of watering is allowed during the interval. "I'll be on standby on the playing surface, using the hand-held remote for this," he says. "The programme, one of many that I can configure with Lynx, is specifically set up to enable us to deliver in such a brief watering period."

A string of 16 TS90 turfcup outfield sprinklers line the pitch perimeter - two are Infinity sprinklers, fitted in the 3G synthetic turf technical area with the Smart Access option. This allows for essential maintenance of solenoid valves and other features, as the stone base cannot be dug up.

Eight infield TS90 turfcups are positioned in two rows, down each 18-yard line. Taken together, the sprinkler water canopy covers every blade of turf. "I wanted nothing visible this time, as turfcups were previously only positioned in the playing area," explains Stephen.

"Lely ran through everything with me before we went live, to ensure I knew the full capabilities of the system but if I ever need anything, I can contact the NSN Connect 24-hour helpline," he adds.

With his term in post at Hampden Park stretching back to 2002, Stephen has overseen many changes to the famous turf. He's now presiding over a new era and, as the sporting arena prepares to host more than 40 events this year, more advanced, controllable irrigation is set to make his challenging role that much easier.