The renowned `Hampden Roar` will be heard in full voice in January, when the first competitive game on the Park's new match pitch kicks off. 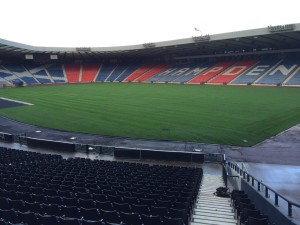 Queen's Park will host Clyde on the 3rd to mark the start of a new era of domestic and international fixtures in a stadium boasting a proud sporting heritage.

Sports contractor SIS Pitches completed the reconstruction of the famous playing surface within budget and on schedule after the existing pitch had to be uprooted to make way for the staging of the 2014 Commonwealth Games in July.

When Glasgow won the bid to host the Games, the decision was taken to transform Hampden Park into an international track and field venue. To achieve this meant removing the pitch and raising its existing level and the perimeter area by 2m, creating a purpose-built platform on which to stage events.

Once these temporary structures had been removed, SIS came on site fighting seasonally challenging weather to begin a four-week project to reconstruct the pitch to its original level and contours, install new drainage, undersoil heating and a fully-automated irrigation system.

SIS Pitches has worked successfully with Hampden Park on several occasions over the last decade or so, renovating and returfing the surface.

"The brief was to deliver a first-class playing surface in keeping with our status as Scotland's national football stadium," said Hampden Park Managing Director Peter Dallas.

"The fixture on 3 January will be the first opportunity the fans will have to see the new pitch first hand. Under the annual maintenance programme, SIS will continue to monitor the pitch to ensure it continues to be presented in the best possible condition," he added.

The project involved removing sand, rootzone and gravel layers, undersoil heating, irrigation and drainage then installing new systems within a deeper profile, recycling materials if at all possible.

"In the late 1990s pitch was built on a plateau, with gradual grading around the perimeter to 0.5m higher than the surrounding Tarmacadam," explained SIS Pitches Contracts Director Phil Blackwell. "Our job was to reinstate the new pitch to the exact level of the existing one."

The 150mm diameter main drainage pipes were laid along the pitch perimeter with 80mm lateral land-drain pipes at 4m centres across the pitch. The computer-controlled irrigation system was installed utilising 16 pop-up sprinklers around the pitch perimeter and eight infield sprinklers, all topped off with turf cups.

The single system undersoil heating main pipework was laid on the gravel layer along the pitch perimeter before 25mm lateral pipes at 250mm centres were ploughed into the profile.

After pressure-testing it then backfilling, a 110mm layer of an 80%:20% medium fine sand and soil mix was spread over the entire pitch, fine-graded, levelled and consolidated ready to receive the new 40mm thick cut turf, composed of ryegrass and smoothstalk meadowgrass grown by SIS Pitches. "It's the most compatible with conditions here in terms of rootzone particle size and percolation rates," Blackwell stated.

Commissioning of the irrigation system and installation of a new 3G synthetic turf area around the technical area, manufactured in SIS Pitches' Cumbria factory, completed the work.

SIS Pitches' experience in stadium turf installations weighed heavily in the contractor's favour, added Sales Director Stephen Spaven. "Hampden Park is one of the most prestigious football sites in Scotland.

"We began working with Hampden more than a decade ago and we remain committed to ensuring that the turf is maintained in optimum playing condition."

Synthetic turf laid by SIS Pitches is making its mark in Scotland too, with the contractor clinching the order to upgrade a training pitch at Dundee United's Gussie Park site with a 3G surface.

"Our earlier installation at Largs Thistle, on the West coast of Scotland, impressed Dundee," Spaven added, and undoubtedly was a key factor in their decision to award us the work."