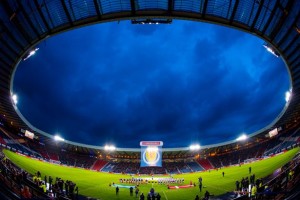 The pitch battle surrounding Hampden's surface took a new twist recently - when it emerged Scotland's groundsmen are up in arms over the marking system that has seen it given the SPFL's top award.

The national stadium's freshly-laid playing field has come under heavy fire again from all sides after Tuesday night's Scotland friendly with Denmark, just three weeks after it needed a £200,000 refurb ahead of the League Cup Final.

Despite its state, however, it emerged this week that the pitch has been awarded 'Platinum' status under the SPFL's Club Licensing scheme - one of only four in the country receiving top marks.

But a number of the top flight's groundsmen are angry at the set-up which sees referees as the sole judge of their work and where they come in the table - and the lack of objectivity.

East Fife were ranked top of the table with an average mark of 4.7 out of five for the year, with Hearts the only Premiership side given platinum status alongside Morton and Queen's Park.

Celtic are the next highest ranked top flight team in 14th spot.

However it's the lack of consistency which has had the men who tend the turf calling for an overhaul of the system.

Like East Stirlingshire and Stenhousemuir being 11 places apart in the table - despite playing on exactly the same pitch.

One of Scotland's most senior groundsmen contacted mailsport this week and told us: "A lot of us have spoken in the past week since the table came out and there's a lot of unhappiness.

"The problem is we can't speak out freely about a flawed system or we risk our clubs being fined, which is ridiculous.

"It's not so much the table or where we all come in it, as how the scores are arrived at. I've had 19 games marked by 12 different referees.

"But not one of them has asked me about the conditions in the week leading up to the game, the rainfall, the temperature, whether I've had development games played on the surface, the team training on it.

"A pitch can also look totally different under lights as it does in broad daylight, but all they do is give a general impression.

"So it's totally subjective."

For the full article, www.dailyrecord.co.uk.