by Gary Smith
in Synthetics and Football
on 13 Jun 2016

Hampton Rangers Junior Football Club based in SW London, courtesy of Kestrel Contractors their main sponsor, have become the first youth football club in UK to have a CORK infill 3G pitch installed at their training ground 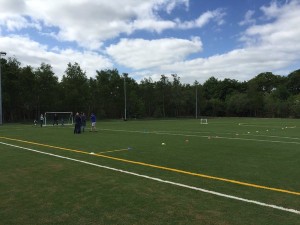 Billy Martin who is Managing Director of Kestrel & Chair of the club took the decision to infill the artificial grass with cork, aided by feedback received from another of the companies' installations at Swedish School in Barnes, London.

Kestrel tested the surface at the Swedish School, via LaboSport, to EN 15330-1 and it passed with flying colours.

'The key driver as to which infill to use at Hampton Rangers was based on one major factor' said Martin, 'player comfort.'

'Player comfort was the only consideration and being mindful of the fact the facility would be used in summer and that cork remains cool regardless of air temperatures, this was instrumental in the decision making process to choose cork infill'.

The benefits of cork are; 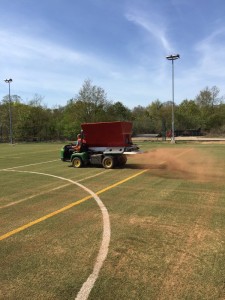 Feedback from users of Swedish School pitches which has now been down for two years were strongly positive from Head of Sports through to end users. They mentioned that players who used professional club academy facilities nearby were reporting that they preferred cork. It was also mooted that the cork granules do not get trailed in on footwear to the same extent as alternative infills.

'Hampton Rangers JFC being a training facility which would be used throughout the year, I was conscious that heat on 3G pitches can be an issue', said Martin. 'We had been keeping a close eye on the performance at Swedish School to ensure that it did indeed perform as expected. The school are more than pleased, to say the least'.

'Cork is more expensive than other infills but we wanted to look at the bigger picture, ie player comfort. We were lucky that strata of the soil was gravel which meant we didn't have to build the base up with tarmac, stone or drainage. These savings allowed us to install the cork.'

The club now hopes to go from strength to strength and has further plans to continue to improve its facilities. The original 3G cage Kestrel installed 12 years ago was the catalyst for the club to grow and improve its facilities for the benefit of the wider community. The new cork infill pitch will continue to do the same and plans are already underway for new changing rooms, toilets and disabled playing surfaces.