1 Hants groundsman to step down 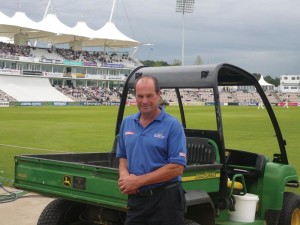 Award-winning Hampshire groundsman Nigel Gray will step down later this year - after his 25th season. Gray, the ECB's Head Groundsman of the Year, an award he also won in 1995 and 1998 when the club was based at Northlands Road, received several plaudits for the Ageas Bowl's Test wicket in July.

He said: "Being part of the Hampshire Cricket 'team' has been a big part of my life for many years for which I am very grateful. The position of Head Groundsman has given me the opportunity and the satisfaction of taking the Ageas Bowl pitches from open fields to Test match standard and to a level of consistency reflected in the Groundsman Award in 2014.

"This will be my 25th year as Head Groundsman and I feel the end of 2015 is the right time to step back from day-to-day involvement on the ground but I expect to be available in a role to support my successor in any way I can."

Gray will continue to work with Hampshire Cricket in 2016 on a part-time consultancy basis with his current assistant Karl McDermott, who will take over all responsibility for pitch preparation from the start of next year.

Hampshire chairman Rod Bransgrove said: "Nigel's commitment and dedication to his role has been outstanding. He has played a key role in building the Ageas Bowl's reputation as one of the best pitches in the country. Hopefully he can have another excellent year and sign off in style!"

See the rest of article on the following link :- Basingstoke Gazette