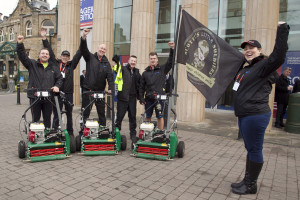 One of the undoubted highlights of BTME 2014 was the arrival of the 'Mad Mower Men' completing their amazing 200-mile trek from Ransomes Jacobsen's Ipswich HQ to Harrogate pushing Ransomes hand mowers.

Their incredibly tough week-long charity challenge - all in aid of Scotty's Little Soldiers - came to an end on the Tuesday of BTME as they triumphantly walked through the entrance at the Harrogate International Centre.

They were then welcomed with applause and party poppers into Hall M with their trusty mowers which they had pushed across several counties in heavy rain, hail and freezing fog.

David said: "I went into it with no training whatsoever, and after the very first day my feet were in bits so I switched to some proper running trainers. They helped but my feet were still held together with blister plasters. It was agony at times but you just get your head down, take some painkillers and get on with it.

"Walking along we had a lot of cars and lorries beeping their horns encouraging us. Now and again we'd be walking through the middle of nowhere and a car would slow down behind us and stick a tenner at us, that sort of thing really kept us going.

"The first few days were very rural and quiet, it was quite eerie at times pushing this mower along in the middle of nowhere, so it was good to get to busier towns and cities towards the end.

Tim said: "The penultimate day was the worst. The entire route had been pretty flat until we hit this hill near Leeds Golf Club. I could feel my heels and my shins going. We had the odd puncture but other than that it went well - we learnt a lot from our mistakes on last year's walk. The team spirit was fantastic."

Gordon added: "My biggest concern was the safety side of it, you're walking along the road itself at times but we made sure we were very visible. Also the weather was a constant worry - I did last year's walk in the summer and obviously it was harder this time round. We had some hail and heavy rain plus freezing fog but you get through it.

"We all knew each other at the start but you end up being very close friends at the end, that's what makes it so special. We talked greenkeeping as well as lots of other subjects for many hours! I spent a lot of time talking to Tim, he's been involved with lots of the education BIGGA have organised, and it was great for me to hear a young guy's perspective on the industry as we walked round."

Peter Driver, PR and Media Communications Manager at Ransomes Jacobsen commented: "The team were so keen to start the walk that they left our head office at around 4pm on the Tuesday evening, a week ahead of the show. On route they were interviewed by BBC Radio Suffolk on three occasions and also by BBC Radio Cambridgeshire and BBC Radio Lincolnshire. On my way up to Harrogate, on the Saturday prior to the show, I even managed to find them on a B-road somewhere north of Sleaford in the wilds of Lincolnshire to offer encouragement and take a few photos.

"What is really amazing is just how robust the Super Certes mowers proved to be. Tim's mower was the same one used for last year's walk from Liverpool to Hull, so it's now done over 400 road miles without any mechanical modifications whatsoever.

"The team has done a tremendous job, all in aid of a very worthy cause and everyone at Ransomes Jacobsen congratulates them on their achievement. Well done Tim, Mark, Gordon and David and to your support team, who were vital to the success of the walk."

Scotty's Little Soldiers is dedicated to supporting the children of men and women killed in action while serving with the British Armed Forces. You can still donate at http://www.bmycharity.com/HardRoadToHarrogate…and watch this space for the lads' next challenge, which Tim's dad Stuart says will be the biggest yet!