A lot has been written about the impending introduction of the EU's Sustainable Use of Pesticides Directive and to a lesser extent the EU Water Framework Directive, both aimed at reducing the impact and amount of pesticide use especially on hard surfaces such as highways and non-porous paved areas. There has been much speculation about how these might be implemented. However, much is now becoming clear with the Chemical Regulation Directorate (CRD) issuing new labelling rules to manufacturers which must be used on new pesticide production by 1st June 2012. On any products bought now that carry the new label rules, these enforce a legal requirement on users to comply. For those managing weed control on hard surfaces immediate changes in practice are essential.

The main change that will affect all highways authorities and highways weed control contractors is essentially a total ban on the blanket application of glyphosate on hard surfaces where there is little weed growth. This has been almost the industry standard practice for many years using mostly adapted ATV sprayers with booms and a row of nozzles that cover from about one to two metres width. Hand lances are often attached to tackle back edges and obstacles.

In place of this practice the product labels now require targeted or spot applications. The new restrictions limit application to a swath width of 30cm covering the kerb edge and drainage gulley, but only where weed growth is present and specifically not over drains. In all other situations weeds must be spot sprayed. This obviously eliminates the use of a standard boom sprayer spraying a whole pavement width. 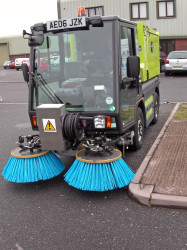 Fortunately, there are technologies around to help comply with the new application techniques but it will mean changes in working practices. As regards the kerb and drainage gulley zone (30cm), where probably 80% of weed problems are generated, the EasySpray PKS CDA sprayer, fitted to road sweepers or similar utility vehicles can allow the operator to spot spray green growth in passing, ignoring weed free sections. This has the convenience of being able to deal with weed re-growth on a more frequent basis while labour and vehicle running costs are zero compared to a separate weed control operation. Cost per full kilometre treated are around £3.00 and far less when spot treating.

For large paved areas with a lot of paving stones, paviers and similar weed friendly constructions then only two methods are practical. A pedestrian hand lance or a high tech Weed Sensor sprayer. If the hand lance approach is used then only the use of low volume systems such as CDA or Mankar ULV make sense. The labour costs and inefficiencies of a knapsack sprayer based operation at least double the cost. Mankar ULV allows and operator to halve the chemical used and at only 2 litres per hectare of Roundup ProBiactive 450 applied neat, to work all day without ever having to return to a base to refill. Weed Sensor technology is also available on vehicle mounted sprayers such as Mankar's Unima City sprayer and Weedit. These sense the presence of green weed growth and activate individual spray nozzles on a boom array to spot spray only where weed growth is present.

Another option in no-spray zones may also by weed wipers like Rotofix pedestrian roller weed wipers. These systems will became indispensible in areas where there are large areas of flagged pavements to treat. Changes in cooperation between local authority departments such as street cleansing and parks departments so that hard surface weed control responsibility can be shared are also key to managing these changes. A combined vehicle mounted and pedestrian approach is now essential.