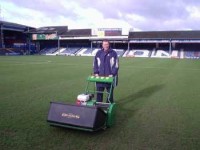 After playing 28 matches, plus several training sessions, up to the end of January the Kenilworth Road pitch is now at its thinnest. In my 12 years as Head Groundsman at Luton Town, it is the most number of games played in the same period since the 1998/99 season when 31 games were played. 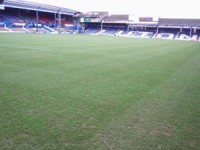 After the game, myself and a small team of helpers started to put back the divots. Because we had used the Koro Field Top Maker at the end of the previous season, the majority of the damage to the pitch was mainly scarring. It had otherwise held together pretty well.

On the Monday after the game we rolled the pitch flat. We applied some sand and seed to the Kenilworth Road goalmouth which was brushed into the top surface to help firm it up and to take away the stickiness. Sand was also used to correct the levels of the linesmen's runs.

Because of the mild temperatures at the start of January I had thrown a few handfuls of grass seed around the 18 yard boxes and this had started to germinate. 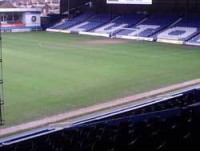 This was done in order to aid the recovery process and to enhance the colour of the sward. We had a few showers which was enough to wash the fertilizer in. It was also a good opportunity, as there was no game on the pitch for a fortnight, to open up the surface to allow plenty of air movement through the root zone. We used our Charterhouse 1.2 metre vertidrain with ¾ inch tines in 4 x 4 spacings to a depth of 9 inches. The pitch was left untouched 'to breathe' for 9 days. During that time, the pitch recovered extremely well with the sward noticeably standing up and, with the iron content in the fertilizer, it was showing a nice colour.

In the week after the Tranmere game, I was pleased to be able to take delivery of a brand new Dennis G860 mower together with verti cutting and brushing cassettes. It is nice having a Chairman who is prepared to listen and who understands the problems associated with annual meadow grass. I was able to persuade him of the benefits in purchasing this piece of equipment.

The following match at home, on 12th February, was the game that all our supporters had been waiting for. The top of the table clash between ourselves and Hull City. The game had sold out two weeks previously and, because of the demand by Hull supporters, it was being beamed back live to the K C stadium in Hull. Understandably, I wanted the pitch to look as good as possible for the occasion. 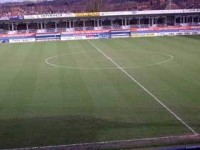 On the Friday night we had another 8mm of rain and, seeing all the water on the roads when travelling to work the following morning, I was keen to check the condition of the pitch. On arrival at the ground I was pleased to see the pitch looking perfectly dry.

It played very well, there were few divots to contend with afterwards, only scarring. And just to cap things off, the team scored in the 89th minute for a 1-0 victory.

In addition to Kenilworth Road, we also maintain the club's training ground where there are two pitches. This time of the year is the worst because the First Team, reserves and youth teams use both pitches on a daily basis. As well as this we have to prepare one of the pitches for either an under 16 game or under 18 game on a Saturday morning. During the week, as there is only myself and my assistant, we are limited to the amount of time that we can spend divoting. We do our best to keep the areas rolled flat ready for the next day's training session and to avoid frost penetration.

We look forward to when the First Team have a long distance midweek away game. Training on the day before the game is limited to just 'a loosener' before they travel, normally for an overnight stay. Then there is the day of the game, with the day after given as a day off, therefore we have two days without any First Team training which does allows us a bit more time on the training pitch for more intensive divoting and aeration work.