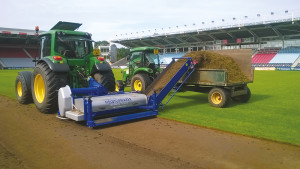 The recent winter with its record rainfall was tough for all groundsmen. However, despite this, the contracts team at the Twickenham Stoop Stadium, home of Harlequins Rugby Club, were still able to promote a strong and healthy sward; the best it has been in the club's fifty years at the stadium.

A little rainfall fact: 10mm of rain across the surface area of the pitch is equal to 94,000 litres of water. During the winter period, The Stoop received on average 50mm of rainfall per week, which lasted for a period of more than eight weeks! This equates to just shy of half a million litres per week. All this had to be carefully managed by Nick Ebelthite, Grounds Manager at Nurture Landscapes and Head Groundsman Paul Sykes, whilst also working to keep the pitch playable during a very busy calendar for the Premiership Club. This often meant the team had to be on site from 3.00am clearing water and aerating the surface.

The Harlequins team is renowned for their style of play which is fast and flowing. For the team to be able to achieve this, it is vital that a consistent firm dry surface is provided. The pitch itself has not had any major renovations or improvements over the last fifteen years and, up until this year, their summer renovation window has been restricted to 3-4 weeks as The Stoop was also home to the London Broncos Rugby League team. This year, Nick and Paul were given a ten week window and they didn't waste any of it!!

On June 2nd 2014, work commenced on the biggest renovation of the pitch to date. Given the level of improvements that Nurture have been able to make over the course of the last two years, by utilising the correct maintenance programmers, the necessary re-laying of the pitch was able to be done within the available window. These works include: 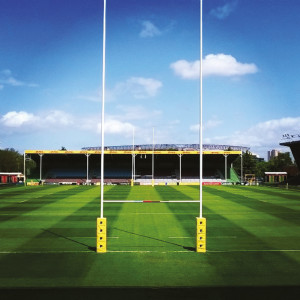 What's in store for the coming season?

Head Groundsman, Paul Sykes, explains: After an extensive summer renovation, it is vital we do not sit back, but continue to develop the pitch. I was once advised to change my outlook of a renovation window. "A renovation implies repairing damage done in the previous season. It's best to look at it as preparation for the coming season and beyond." This helps us to be forward looking and making sure we are continually striving to improve the pitch. This season our major focus is in root development.

The summer renovation works have made a real impact in opening up the soil structure and the Koro has helped to remove nearly all of the poa annua. We now want to ensure our new perennial ryegrass mixture develops a strong rooting system. This will be achieved by continuing our aeration programme and using water sparingly, and then drenching to encourage the roots to follow the water deep into the profile. The team is also investing more into their soil analysis and fertiliser programme to ensure the grass has all it needs, with a greater focus on the micronutrients that often get overlooked in a normal NPK feed.

With a strong relationship, with Daniel Jones of the Turf Care Group, we have been able to develop a detailed programme for the season. Whilst we are not keen to be piling loads of chemicals onto the pitch, we do want to make sure the grass has enough support vitality ahead of the winter season. We are using a number of organic products from humus based fertilisers to liquid seaweed and biostimulants. As a company, we have a very strong approach to green initiatives and there is no reason why we can't continue this theme whilst maintaining elite sports turf.

An insight into the playing season

A typical week for Paul and the team involves repairing the pitch from the previous weekend's match. This is often done using a Quadraplay or, in the right conditions, a chain harrow. We will then brush and cut the pitch and irrigate if required. Generally, there may be some form of additional pitch usage one day during the week, whether this is from the high involvement Harlequins have with community rugby or the occasional corporate/sponsors day. 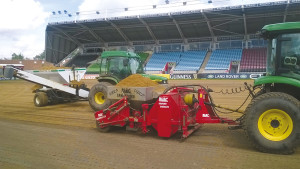 Thursday afternoons tend to be kicking practice, with a captain's run on a Friday morning. This is usually a more relaxed affair where the coaches take a step back and allow the captain and the team run through the plays on their own. Friday afternoon will then be the build up to a match on Saturday.

It's not only the Aviva Premiership season to be ready for, there is also the European Cup, LV Cup, A-League games, and the Stoop stadium's close involvement with the England Ladies teams sees a number of home international games as well. All these fixtures do take their toll on the pitch, but it's also the challenge that comes from maintaining top flight sports pitches.

As previously mentioned, Harlequins have a very strong community rugby programme. This involves junior teams of local clubs being able to play matches on the pitch prior to a Premiership game. Whilst this is not always ideal in the depths of winter when the weather is against you, we understand this is a big part of what Harlequins stand for. We love being part of the Harlequins family and working together to provide an elite playing surface, whether it be for the Harlequins or a community rugby event.

Nick, Paul and the Nurture team are looking forward to another successful season, and helping Harlequins to continue to cement their position as one of the top rugby clubs in the country.