by Tamworth Herald
in Football and Synthetics
on 08 Jun 2016 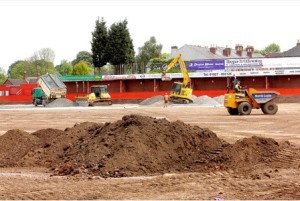 Harrogate recently followed the Lambs by announcing they would be replacing their traditional grass pitch with an artificial surface.

And Weaver, a former Tamworth player, is very much backing the move.

He said: "It is a big decision for us as this ground is over 100 years old and has always been grass. So it will be changing quite dramatically.

"What we looked at was the fact the likes of Maidstone and Sutton United have done very well on pitches like this.

"They really are the shining lights in the community as well through the use of their pitch.

"It is a real no-brainer from the club as we look to continue to develop in the community.

"It is perhaps something that we haven't been embracing as much as we perhaps should have been. This move gives you the chance to take action."

The 38-year-old, who spent the 2006-07 campaign at the Lamb, also felt that it made clubs more a viable business project compared to those who offer a traditional grass option.

Weaver said: "I am dealing with agents and players on a daily basis and the wage demands go up every year.

"I've always been interested in business, with my partner being involved in one, and you either keep living like you are as a club or become a full business.

"It takes a lot to keep a business running but an investment like this can be pivotal.

"If myself or my dad were to move on then when it comes to selling the club it makes it a much more attractive proposition for the people coming in as they can see it as an income generator.

"For me you see some clubs spending twenty thousand a season seeding and preparing their pitch each summer.

"Although this is a big investment it is a logical move and the only real way to do it.

"We actually made the decision several months ago now, although Tamworth were the first club in our league to announce it.

"At the time we were just coming up with a usage plan as we will be having under-8s all the way up to the under-21s."

The Harrogate manager also pointed to the fact that it was something that he had been considering for a couple of years - due to grass pitches hampering the style of play that he was looking to produce.

He added: "When it comes to our pitch probably for eight months of the season it isn't great. It always goes down the middle and you end up having to play on the wings and even at times changing the whole way that you play with you having to design a plan for difficult pitches.

"I've been interested in finding out more about it for a couple of years now. The quality of the surfaces have improved massively over the years.

"Sometimes little injuries suffered by players on the surfaces perhaps overshadowed how good they are. You only have to look at pitches like Maidstone, Sutton and a number of Scottish and Irish sides to see the benefits."

For the original article, visit www.tamworthherald.co.uk.