Harrogate Week 2007 began with the announcement that BIGGA and the IOG are to stage strategic discussions on the possibility of a merger of the two organisations. For many in the industry this is something that has been long overdue.

At the midweek press briefing the Chief Executive of BIGGA, John Pemberton, explained that discussions were at a very early stage. Representatives of the two Boards had met the previous Thursday (19th January) and there was agreement to look at the advantages of a possible merger. In his usual open and respected manner, the Chief Executive explained that the detail of a merger would be discussed at forthcoming meetings, there were no set timescales and the ultimate decision will taken by the membership of the two organisations.

Away from the politics, the Show was generally regarded as being a great success. The absence of some of the larger manufacturers did not have a marked affect on visitor numbers. In fact, those machinery manufacturers in attendance saw it as an opportunity to promote their products at the expense of their main rivals.

There was a general view from the exhibitors we spoke to that numbers and genuine enquiries were very good.

As ever, one of the most enjoyable events was the presentation of Terrain Aeration's Unsung Heroes Awards. The awards recognise the commitment and dedication of Greenkeepers and Groundsmen around the country who who do work 'above and beyond the call of duty' and, in many cases, in a voluntary capacity. This year's worthy winners were Brian Firmin, Groundsman at Halstead Heath Cricket Club in Essex and Ronnie Bunting, Course Manager at Ballochmyle Golf Club in Mauchline. The judges praised the dedication and skills of both winners, and thanked them for the important and valuable contributions they make to the workings of their respective clubs. 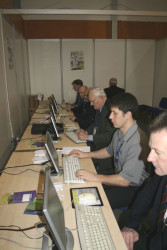 At the Internet Cafe there was plenty of activity, with exhibitors waiting to get on the computers before the official opening time. Fortunately, some of the Pitchcare team members need less sleep than most (or were they still awake from the night before?), and were happy to oblige. We also had the pleasure of meeting many of our Message Board regulars; it was an opportunity to put faces to names, and an even better opportunity to have a great natter.

All in all it was a very successful show all round, very friendly and very enjoyable.