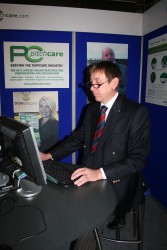 Another BTME has come and gone - well, Harrogate Week to give it its correct title. Given the present state of the economy, the frozen ground conditions and the non-attendance of the 'big boys' you could have excused BIGGA for having cold sweats leading up to the opening day.

So, when queues started to form on Tuesday morning, along with that distinct aroma of stale beer and garlic, you could have excused the BIGGA staff both a wry smile of satisfaction and a collective 'phew'.

Sure the exhibition was smaller, only occupying halls A, B, C and M, and visitor numbers were certainly down on last year. But, even in these trying fiscal conditions, there was a general 'feel good' factor at the show.

For the Pitchcare team the Harrogate show is an important date in their diaries. It gives us the opportunity to catch up with the latest developments, products and services but, more importantly, to network with industry folk.

Much of this networking occured at the Pitchcare Internet Cafe which, this year, had been sponsored by Syngenta who were promoting their improved Green Cast turf disease and weather forecasting service.

A host of Pitchcare members popped on the stand to see us including well known message board posters Anthony Asquith, Mark Hanson, Jon Lawrence, David Goodjohn, Malcolm Gardner and Barry Pace. We were hugely encouraged by the comments we received about the website and magazine.

There was much to do and see. The seminar programmes were diverse and well attended, with our own Dave Saltman giving a one hour presentation on changes in the industry over the past twenty years. Plenty of subject matter there.

Exhibitors appeared busy with old faces making a welcome return in the shape of Gary and Sue Mumby, who were trying to bounce back from being the first high profile casualty of the economic downturn in the industry. We wish them well, as we do all our suppliers in these difficult times.

As you can imagine, there was a fair amount of discussion about the credit crunch and how it is affecting our industry. We met a couple of course managers who had lost their jobs and had come to BTME specifically to look for new career opportunities.

New products included Scotts' range of specially formulated grass seed for golf courses and its Seed Icon Programme. This programme makes it easier for turf professionals to select grass varieties that are bred for tolerance to extreme conditions and to solve common turfgrass problems. Each of the six trait-specific programmes - drought, cold, shade, wear, salt and visual merit - is identified by a distinctive icon.

A Belgian company, ActionEco, showed a pre -production greens triple mower powered by batteries that can run for seven hours before having to be re-charged. The AC servos power wheels, cylinders and on board fans to collect and dispose of grass clippings. The mowers cutting heights can be adjusted electronically, operated from a joystick that can instantaneously change the HOC between 3mm to 50mm with 0.1mm accuracy. It will be interesting to see how it performs especially in the wet.

The Unsung Heroes awards, run by Terrain Aeration and sponsored by Pitchcare and the English Golf Union, were won by Bill Mitchell, Head Greenkeeper at Perranporth Golf Club in Cornwall and Adrian Kay, Head Groundsman at York Racecourse for their outstanding commitment to the Industry.

The success of Harrogate Week is a combination of a diverse seminar programme, full exhibition halls and, of course, the Harrogate nightlife.

BIGGA 's first ever Casino evening was a success with 400 punters enjoying a chance to gamble on the tables . BIGGA's Communications Manager, Scott Macullum, certainly had his hands full keeping an eye on the showgirls who added some colour to the evening.

Of course, industry shows will always have their 'knockers' - "the show died after 3 o'clock", "Thursday's a waste of time" etc. etc. but, clearly, exhibitors and visitors saw the benefit of being there.

Harrogate Week is a good opportunity to network with suppliers and colleagues alike, to see products at first hand and to enjoy a spot of socialising!

Next year, the major manufacturers are set to return and the show will, once again, bulge into a fifth hall. Ever considered using Hall D BIGGA?

Finally, we wish Peter Todd, Golf Courses Manager at The London Golf Club, well in his year as BIGGA chairman.