0 Golfers raise funds for Hart after member is saved 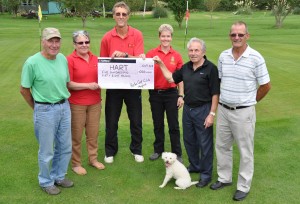 Horton Golf Club members raised more than £1,000 for charity with a golf competition day - and one of the charities benefitting is HART (Henfield Area Response Team).

Club member Malcolm Town collapsed while playing golf a year ago and was saved by his playing partner, HART responder Martin Tooth.

Martin, who is club captain, happened to have his defibrillator in the car and was able to reach it in time to administer lifesaving treatment.

"There is no doubt that without the defibrillator Malcolm would not have made it," said Martin at the nine-hole members-run club near Henfield.

And HART are shortly to equip adjoining Henfield Business Park with a public access defibrillator.

Horton Golf Club has raised more than £8,000 in the last 10 years with charity tournaments, under the banner of Tantara's Wish - named after the grandaughter of club president Albert Stillwell.

He started the fundraising for specialist cancer research following the discovery of a rare genetic cancer in his family called VHL which has passed from his late wife to Albert's son Allen and grandaughter Tantara, who live in Worthing. Albert lives in Lancing.

As a result of treatment Allen has received in Haywards Heath, £558 from the July fundraising day has gone to Hurstwood Park Hospital League of Friends. An identical amount has gone to HART.

HART chairman Dick Nye said: "We are very grateful to the Horton players who raised this money.

HART is supported entirely by public donations and their experience of how effective we are is an example of how vital the service is to the Henfield area."