Pools Groundsman Dave Brown is celebrating this morning after receiving notification that the Victoria Park surface has been named the best in League Two.
It's not the first time Brown has won the award having previously taken the accolade in the 2002/2003 and 2003/2004 seasons. Brown was also runner-up in 2004/2005 and, after a one-season absence, he is back at the top of his game in League Two. "After every game you are awarded a mark out of five by the Match Referee and the visiting Team Manager," Brown 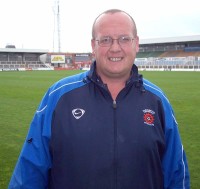 explained. "Then the three teams with the highest marks are visited by the playing surface judges who then consider the decision."

Figures made available to us say that Brown collected a 4.22 average mark - a figure made even more impressive when compared with the divisional average of 3.21.

"I wasn't going to build my hopes up but I am happy with the way the pitch has performed this season. "It's always nice to be recognised and hopefully this won't be the last trophy we pick up this season!"

Meanwhile boss Danny Wilson was thrilled that Brown had been handed the award, claiming it was never really in doubt. "The pitch at Victoria Park is by far the best pitch in the division," he commented. "It's been in fantastic condition from day one and Dave and his team do a terrific job."

Congratulations Dave from all the Pitchcare team.