1 Have the world's worst groundsmen been found working in Norway's 7th tier?

Personally, we like to get involved with and try our hand at as many aspects of football as we can.

We've played five-a-side, managed a Sunday League team (we were more John Carver than Jose Mourinho), have performed our linesman duties... but we've never taken on the role of groundsman.

Why? Well, the pressure. Sure, you may get a bit of abuse from a lumpy centre-forward if you wave them offside, but imagine getting the actual pitch wrong. A tiny penalty area, wonky lines, a centre circle that resembles something more like a triangle… it must be a nightmare job.

A nightmare which became a reality for these two jokers : literally the worst groundsmen in the world, currently plying their trade in Norway's seventh tier. 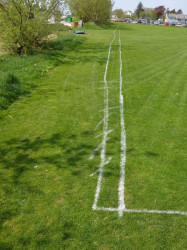 Just 30 minutes before the match between Julebygda and Riska 3, Quang Minh Ha and Nick Duy Do were asked to paint lines for the pitch.

The problem was, they had no proper equipment with them or the time to do a proper job - so instead did it all by eye.

To be fair, even Leicester City's godlike groundsman might have struggled with just a tin of whitewash and a brush.

"It's probably the first and last time we get this job," admitted Minh Ha. You're not wrong there, mate.

There was also an issue with the two penalty spots - one being 13 metres away and the other just eight metres. Shambles!

Riska 3 eventually ran out 3-1 winners, but we're just amazed they managed to actually play a game through the inevitable fits of laughter!