0 Have you Ever Considered Working in Canada? 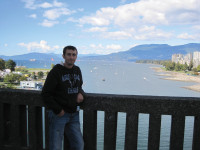 In the summer of 2008, after three years as Superintendent of Mountrath Golf Club, my wife, Marie, and I decided that we would try broadening our horizons and take the plunge to live and work abroad. The only stipulation we decided on regarding location was that the first language of the country had to be English, so we both could find work comfortably without having to learn a new language. We had both worked and lived in the States at some point, however obtaining working visas for there was tough. So we decided to look further north, and ended up applying for a one year work visa for Canada. Vancouver was our destination city of choice, voted the world's most loveable city nine out of the past ten years, and boasting skiing in the morning and the beach in the afternoon; it seemed like the perfect location.

In March 2009, upon returning from a six month trip around South America and Africa, I applied to several golf courses in the Vancouver area. Following a phone interview with Jim McGarvey, Superintendent at Seymour Golf and Country Club, I was hired as a Senior Groundsman. We arrived in Vancouver on April 13th, 2009 and I was harvesting aeration cores at 6.00am on April 15th!

Vancouver is located on the west coast of Canada in the province of British Columbia. The downtown population of the city is approximately 500,000, but urban sprawl quickly brings the population up to around two million, if you take in the surrounding thirty kilometres. It is the biggest city in the province of British Columbia, which is almost four times the size of Great Britain. The city is fringed by water and set against a spectacular backdrop of mountain peaks on the north shore. These North

Shore mountains - Seymour, Cypress and Grouse - provide skiing in the winter and mountain biking and hiking in the summer for locals and tourists alike. The world renowned Whistler Ski resort is only a ninety minute drive north.

The city is most well known for having the largest urban park in North America - Stanley Park - which is 1,000 acres in size and was named after Lord Stanley, the Governor General of Canada at the time. He also was the man who donated the Stanley Cup, the much sought after Ice Hockey Championship trophy.

Vancouver's climate is considered moderate oceanic. This translates to summer months that are typically dry, often resulting in several weeks/months without rain, to winter months where it is not uncommon to have two inches of rain every day for two to three weeks. The north shore, where Seymour Golf and Country club is located receives, on average, ninety inches of rain a year. Temperatures are similar to the UK and Ireland throughout the year, with slightly warmer summers.

Seymour Golf and Country Club is situated in North Vancouver, approximately twenty-five minutes drive from the city centre. The lease for the existing property, which is 180 acres, was signed with the municipality of the District of North Vancouver in June 1953. The agreement with the district had one major condition which would be of considerable benefit to the club throughout its early years. The club was to be a private organisation, but the public would be allowed to play on Mondays and Fridays with a percentage of the proceeds of each green fee going to the district. This condition still remains in the current lease, so the club is essentially a semi-private Country Club.

This allows the club to generate a steady stream of revenue in the summer months through green fees, which helps to finance a higher quality product for its members on the other five days. I have worked at a number of clubs throughout my career, including TPC Sawgrass and Congressional Country Club, and Seymour is by far the busiest club, with a one hour start ahead of golf every morning for maintenance, and tee times booked solid right through until 5.00pm.

Construction on Seymour G&CC started in the autumn of 1953, with an ambitious stipulation from the district that it must be open for play by July 15th 1954. Its premature opening on that date took years to erase the notoriety of jungle rough, swampy fairways and abnormally high counts of lost balls.

In 1969, North Vancouver District offered to build a new back nine for the club in exchange for some prime residential land that the club owned. The back nine changed substantially from its original design, and was eventually reopened for play in late 1972.

In 2004, the front nine were renovated following a redesign by Ted Locke. The work included new USGA greens on seven holes, tee improvements, levelling and reshaping of fairways and rough on several holes, drainage on most holes, installation of culverts and covering open ditches, the redesign of the short game practice area and an irrigation system upgrade.

Grass species around the golf course consist of Poa/Agrostis greens, Poa tees and fairways and Poa/Perennial ryegrass roughs. When the front nine was renovated in 2004, these greens were sodded with turf that had been grown from aeration cores that had been taken from the previous greens. This was to ensure continuity between the old surface and the new surface, and this poa had adapted to growing in the climate of North Vancouver.

Greens and collars are kept on a fourteen day foliar fertiliser programme, following aeration in spring until the end of October. This programme includes approximately 5kg of nitrogen/Ha, plus various seaweed and biostimulant packages every fortnight. PrimoMaxx is also included at the manufacturer's recommended rate.

Throughout the growing season, fungicides are applied on a preventative basis. All greens and collars receive a monthly application of the wetting agent, Revolution, which has substantially reduced our need to hand water greens through hot periods. Because greens were constructed with an 80/20 rootzone mix, and the collars were constructed of pure sand, we do run into issues of hot spots as the collars dry out quicker than the greens. Other inputs on greens include applications of lime, Epsom salts to control moss development, and potassium.

Throughout the growing season, verticutting and topdressing is carried out to ensure firm, smooth surfaces for our members. We also utilise the Planet-Air system to introduce air into the rootzone on a bi-weekly basis.

Generally, the pests and diseases we see here are the same that one would see in the UK and Ireland. Microdochium Patch and Anthracnose are the two most common on greens, with red thread and dollar spot common on tees and fairways in midsummer.

Greens are maintained at a height of 2.8mm throughout the summer months using a mixture of petrol and electric triplexes. The club is bound by the by-laws of North Vancouver, one of which states we cannot operate machinery close to homes before 7.00am on Monday to Saturday, and 9.00am on Sundays. This is the main reason we run the electric triplex around the perimeter holes each morning. We roll greens on average three times a week, but may increase that this year and skip some mowing to ease stress on the turf and save on manpower.

Tees and approaches are mown with a Toro 3250 on an every other day cycle at a summer height of 9.5mm and fertilised along with the fairway applications. Fairways are mown every day at 11mm, mostly nine a day and the mow lines are alternated throughout the growing season. This year, we expanded our wetting agent programme to include fairways and approaches and the results have been very impressive. Using Revolution has reduced our water bill by 20-30%. As we buy our water from the city mains, this savings will almost pay for the cost of the wetting agent.

The majority of the staff at Seymour are employed on a seasonal basis, approximately from the middle of April to the end of October. On a typical day in the summer we would have between fifteen and twenty staff on the property. We have a core crew of six to eight that work Monday to Friday. 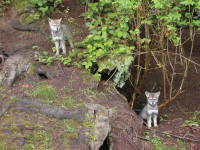 The Audubon Cooperative Sanctuary Programme (ACSP) is an education and certification programme that helps organisations and businesses protect the environment whilst enhancing their bottom line. The 'plan-do-check-act' approach of the programme offers information and guidance to implement an environmental management plan that improves efficiency, conserves resources, and promotes conservation efforts. Audubon International awards certification to publicly recognise and reward the environmental achievements and leadership of ACSP members.

Seymour was the first Canadian golf facility to join the programme in 1992. We carry out water testing twice a year to ensure that we are not contributing to contamination of watersheds. We have created buffer zones around all ponds and bio-swales, where no pesticide or fertiliser is applied. We also conduct bird surveys throughout the year. Most days, throughout the summer, you can see blacktail deer and coyotes roaming around the perimeter of the course and very occasionally a black bear.

With ninety inches of rain a year, it's hard to believe that the system would be used much. However, the summer here can get very dry and, when I arrived in 2009, there were eight straight weeks of no rain. Seymour uses the Rainbird Cirrus irrigation control system. Included with the Cirrus system is a weather station that is located on the golf course. The weather station monitors for relative humidity, temperature, wind speed and direction, solar radiation and precipitation in order to determine evapotransporation rates from the turf.

The Cirrus programme uses the data collected from the weather station to determine appropriate irrigation cycle times. Cycle times are then modified manually, as required, to meet the demands of the turf based on observations.

Fairways and roughs are watered by series 900/950 heads, and greens, tees and approaches are watered by series 700/750. In total, on the property, there are approximately 600 heads watering turfgrass areas, with another 100 watering landscaped areas. As the system is nearing twenty years in the ground, we are now experiencing a lot of glue failures in the PVC pipe so, throughout the summer, we spend a lot of time isolating zones and replacing sections of pipe.

It's just over three years since I arrived in Canada and I would like to thank my manager, Jim McGarvey, for offering me the opportunity to work at one of Vancouver's finest Country clubs. Jim is a very easy person to work for and I enjoy learning from how he maintains such fine turfgrass under some trying circumstances.

I have found Canadians to be very friendly, accommodating people who enjoy the odd beer and the great outdoors to its fullest. I would advise anyone seeking a move in the turf industry to consider Canada seriously, as jobs are plentiful countrywide.

If you require any further information regarding moving to Canada and seeking employment here, you can reach me at buckleyeoghan@gmail.com. Slainte!!