An ambitious four-year project between 2007 and 2011, which saw the whole course redrained, and the east bend recambered and realigned, has provided Haydock Park with two separate flat tracks, each 18m wide, so that by using exacting rail movements, fresh ground can be provided for runners at multi-day meetings.

"We have thirty fixtures a year, and the track was not getting time to recover between meetings," explains Clerk of the Course, Kirkland Tellwright. "Having two flat tracks allows us to provide improved going and to race more frequently. It has also benefitted our biggest meeting, the Betfred Sprint Cup Festival. This is held in September, by which time the track has had a lot of use, making it difficult to prepare the going, especially in poor weather. Now, the course used for the Betfred Sprint Cup will not have a horse on it for more than a month beforehand."

He adds: "We always had good racing, but improving the going means that trainers will support us with better runners, and we can then upgrade the programme accordingly."

Haydock Park is also well known for its national hunt racing, and for fans of the great Kauto Star, will always be remembered as the place where he began his campaign for the Cheltenham Gold Cup each season, winning October's Grade 1 Betfair Chase on no less than four occasions.

"Kauto Star's career coincided with the completion of the early stages of our redevelopment programme, and his appearances in the race were a boost for the course," comments Kirkland.

The turf was koroed off, new sand slits installed and a sand tray laid before the track was returfed using twenty metres long by one metre wide big rolls.

Developments had to take place in stages so that racing could continue and, although the inner and outer track were completed at different times, the result is a seamless 36m wide strip of pristine track

At the east bend, cut and fill construction required some 7000 cubic metres of muck shift, which was transported along the racecourse's internal road, through the horsebox park and round the back of the course for stockpiling. It has since been planted with trees and is gradually blending into the landscape

The £2.5m process was overseen by Mike Harbridge of Professional Sportsturf Design (NW) Ltd in conjunction with Milton Keynes Surveys, with John Mallinson fulfilling the contract. 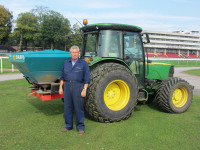 "The contractors worked to the highest standards, and nothing was too much trouble," comments Head Groundsman Maurice Crooks, who has worked at Haydock for forty-two years.

Construction was complicated still further by the need for the most precise measurement of the angles and camber on the bend to ensure safety of horses and jockeys. The maximum radius of the bend is 105 metres, but the cross camber is very helpful in making for exciting, but safe racing.

"The build was done in segments like an orange, with each measured using GPS," comments Maurice. "We are equally painstaking when moving the rails, to ensure that we maintain the correct dimensions when switching the racing line from the outer to the inner track during a three day meeting."

This, in itself, is some operation - typically a team of twenty-five men will move eight furlongs of rail in four hours on a Saturday morning, with a separate team repairing the previous day's track. 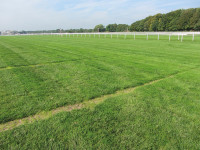 A 10m extension to the width of the national hunt course, which runs inside the flat track, was also made during the development, with a new fibresand canter down and internal road built.

"The drainage on this section has proved to be inadequate so, this year, we have added new laterals to a main drain on the final three and a half furlongs, before sand slitting and reseeding," says Maurice. "However, the dry summer has made it difficult to establish new seeds, so it will not be ready for our October meeting."

And this is where the wide, adaptable track comes into its own - for the early national hunt fixtures, the fences will be placed on the inner flat course which was the footprint of the original jumps course. 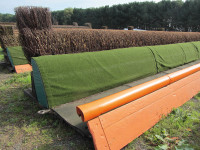 Another factor which makes this possible - and which helped with the decision making process when it came to planning the developments - is Haydock Park's use of portable fences.

"We started with fixed brush hurdles, which are used to help horses progress from hurdles to chase fences, and they were so successful we had portable steeplechase fences built," explains Maurice. "Their frame is a trailer chassis, allowing them to be moved easily from the track to the yard for maintenance over the summer before being towed into place in October."

Portables offer lots of advantages as Maurice points out: "They cost around £7000 each to build, as opposed to £4000 for a fixed fence, but the maintenance and labour costs are considerably less. Using portables also minimises the compaction that is caused by shunting machinery around a fence and the build-up of ground from using divot mix in the same place on the take-offs. If there is an issue with the ground in a particular area, we can simply remove the fence, without having to rail it off."

The continual quest for improvements has not ended yet. In 2012, Haydock purchased an Imants Shockwave rotary decompactor, which is used in conjunction with an existing Vertidrain 7626 to relieve compaction, aerate the soil and encourage root growth. 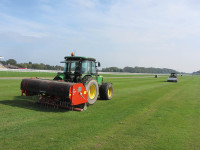 "The Vertidrain is very good, but we felt it would be beneficial to add a further decompaction operation," explains Maurice. "The Shockwave works to 9-10in, followed by the Vertidrain at 9in and the procedure leaves a clean finish. We treat both the flat and national hunt tracks at the end of their respective seasons, and the results have been very impressive."

In between, the track is slit once a month to encourage free drainage and promote root growth, and mowing takes place three times a week, using a front mounted Votex rotary.

The entire track is cut to 3.5in during the summer, with the jumps course allowed to grow to 4-4.5in for the winter.

"We used to cut the national hunt track much shorter in the summer but, as there is a small amount of overlap between the courses now, it all needs to be the same length," Maurice comments. "It's important not to let it get too long as straggly growth can develop." 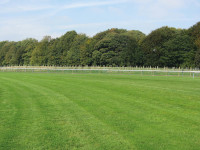 A Trimax Stealth is deployed once or twice a week to keep the runway at the centre of the course smooth enough to allow racegoers to arrive by helicopter or light plane.

A carefully planned fertiliser programme takes account of the year-round racing programme which means that the turf is always on show.

"We work closely with the agronomists from our suppliers, and take advice from Mike Harbridge," comments Maurice. "It's important to get the levels right, especially as the sand tray under the flat track means that it loses nutrients very quickly."

Irrigation is needed less than on many courses, but a Briggs reel and two Upton booms - which have been modified for tractor towing - are on standby. Up to 8mm can be applied to the flat track in six to seven hours. 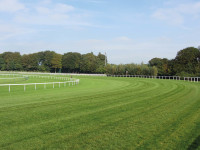 As part of the Jockey Club Racecourses Group, Haydock Park has access to tractors and machinery from John Deere, with the fleet including three 5515s, a 5410 and a 5700 tractor, Gator utility vehicle and a zero turn ride-on mower.

"We used John Deeres before and get on very well with them. The 5515s are 80hp, which gives plenty of power to pull the Verti-Drain, but they are still very compact," says Maurice. "The 87hp 5700 is mainly used for heavier jobs such as towing the starting stalls."

With such a busy programme, having a good team is essential. Maurice is assisted by Alan Fyles, who is also head gardener, and eleven gardeners and groundsmen, plus a fitter and sweeper driver. Several staff have been at Haydock Park for more than forty years, and, at the other end of the scale, two are under the age of twenty, having come to the course from work experience placements.

As well as the course, duties include looking after a total site of around 280 acres which aslo comprises surrounding woodlands, fields and car parks, along with the racecourse stables.